Yes, it’s a bother to figure out parking at UNLV, but this was one of the tickets of the year for journalism fans and those who really miss John L Smith. Jay’s attention to the rolling trainwreck has yielded an inspired 11,000-word opus and countless tweets about a series of stories that continues to unfold in comic-tragic fashion.

The presentation – #RJquestions – Twenty Unanswered Questions about Adelson’s Purchase of the Review-Journal: Reflections on a Civic Disaster by a outsider to Las Vegas was sponsored by the Las Vegas Chapter of the Society of Professional Journalistsand Greenspun School of Journalism and Media Studies at UNLV.

Kudos to the hosts and sponsors. This was a much needed public review. I only wish that the two academics who introduced Jay had accounts on Twitter.

Many thanks to spjlv for the livestream of the UNLV talk

https://www.periscope.tv/w/1BRJjlEjVBRKw (hurry, you have less than 24 hours to watch this)

Considering it was the use of #periscope that addled newspaper jefes, it’s great to watch see the channel being used again.

Rosen is one of my heroes (think press think) and his presentation in Las Vegas about Las Vegas was meta at its meta finest. This was a measured recounting of the disaster from the early stages of the newspaper’s purchase to recent battles with editors and columnists. All of this was told on single page questions. Answers to the questions were minimal (think Lost), but the journey taken on each question was a sight to behold.

I only wish there were more attention to the ‘Civic Disaster’ and explore such damning and insightful terms. Locals are the last to see the disasters in their midst.

Here are my questions regarding the RJ

How should RJ subscribers engage the RJ? Besides unsubscribing, what are our options? After the purchase, the newspaper suggested it would create an ombudsman position to engage readers. Perhaps local need an ombudsman not with any particular newspaper, but the a broader cross-section of reporters and editors.

How are other newsrooms using Periscope? For those following the RJ the past six months, Periscope was our live window into the editorial meetings and the session that resulted in Smith ‘being taken to the woodshed.’ I asked about this (minute 49). There was a brief and riveting time in which staff were live tweeting various meetings and a sense of openness prevailed. Such transparency was squashed on the windshield in Las Vegas.

Is anyone editing a video documentary? 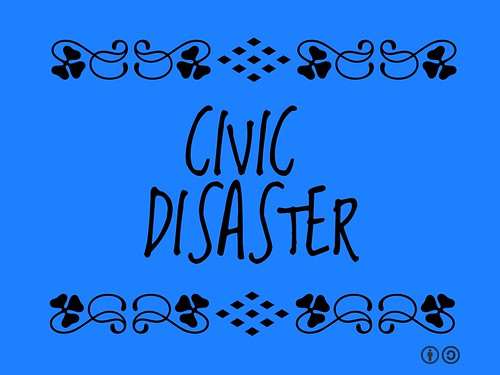 Journalists as ‘hit squad:’ Connecting the dots on Sheldon Adelson, the Review-Journal of Las Vegas and Edward Clarkin in Connecticut

"…you should know that the story has been written to conform w/the strategic position of Adelson or his company." https://t.co/rU7kBAKb0Y

If you care about the future of journalism/media in Las Vegas, don't miss @jayrosen_nyu TONIGHT at UNLV. Details: https://t.co/JmPilZm2Rq

Q: Whatever happened to the Reader Advocate or #Ombudsperson to respond to reader concerns? #rjquestions @jayrosen_nyu @reviewjournal pic.twitter.com/ksN3dkg5Zw

Thanks, Howard. Something I picked up. People in Vegas were really shaken by the loss of John L. Smith's voice. #RJquestions

Is there anyone there from The Adelson News to answer @jayrosen_nyu's #RJquestions?

Jay Rosen on RJ: "Thus may be paper that needs ombudsman more than any other in U.S." #RJquestions talk at UNLV

Unanswered questions about billionaire Sheldon Adelson’s ownership of the Las Vegas Review-Journal will be discussed at 6 p.m. Thursday May 26 by New York University Journalism Professor Jay Rosen in the Greenspun Hall Auditorium at UNLV.

Widely respected as a media critic, Rosen has been commenting at PressThink.org on Adelson’s secretive purchase of Nevada’s largest newspaper in December.  His visit to Las Vegas is sponsored by the Las Vegas chapter of the Society of Professional Journalists and hosted by the Greenspun School of Journalism and Media Studies.

UNLV Associate Professor of History Michael Green will participate in the May 26thconversation. Green also has commented on the Adelson purchase and the resulting controversy in his weekly column in the Vegas Seven magazine.

Rosen has been an NYU professor since 1986. His PressThink weblog was honored in 2005 by Reporters Without Borders. Rosen is a semi-regular contributor to the Huffington Post. He is an outspoken advocate of citizen participation in journalism. 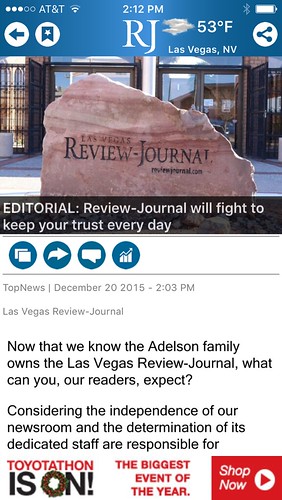