This year’s theme: Go Wild for Life. Please help us translate this motto in other languages.

“Stockholm was without doubt the landmark event in the growth of international environmentalism,” writes John McCormick in Reclaiming Paradise. “It was the first occasion on which the political, social and economic problems of the global environment were discussed at an intergovernmental forum with a view to actually taking corrective action.”

The celebration of WED began in 1972 and has grown to become one of the main vehicles through which the United Nations encourages positive action for the environment. Through WED, the UN Environment Programme (UNEP) enables everyone to realize not only the responsibility to care for the Earth, but also reminds one and all of their individual power to become agents of change. 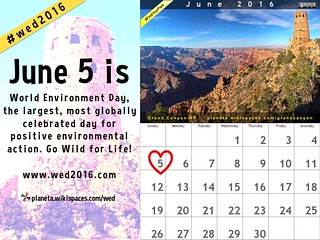 #WorldEnvironmentDay is a global celebration. What are you planning for 5 June? https://t.co/ZeOyiRaII4 #WED2016 pic.twitter.com/GDzSQO3TQf