Today: The White House hosts the 8th Annual White House Tribal Nations Conference, bringing together leaders from federally recognized tribes to Washington, DC. The President and members of his Cabinet will discuss a range of issues important to tribal leaders, with an emphasis on ways the federal government can continue to strengthen the nation-to-nation relationship and ensure that progress in Indian Country endures for years to come.

The Tribal Nations Conference delivers on a promise the President made during a visit to the Crow Nation in Montana in May 2008, where he pledged to host an annual summit with tribal leaders to ensure that tribal nations have a seat at the table when facing important decisions about their communities. This year’s Conference – the President’s eighth and final of his Presidency – marks the historic progress his Administration has made to strengthen the nation-to-nation relationship and build a more prosperous and resilient Indian Country.

In addition to today’s Conference, the second annual White House Tribal Youth Gathering will be held on September 27, 2016 as part of the Generation Indigenous (Gen-I) initiative. The gathering will bring together approximately 100 Native youth leaders who will participate alongside tribal leaders and senior federal leaders in breakout sessions, panels, and youth-specific programming. Since the President launched Gen-I in 2014, thousands of American Indian and Alaska Native Youth have mobilized to address the most pressing needs facing their communities. Through youth engagement and strategic investments and policies, Gen-I has helped cultivate a new generation of tribal leaders and improve the lives of Native youth.

Asked and Answered: A President for Indian Country – White House 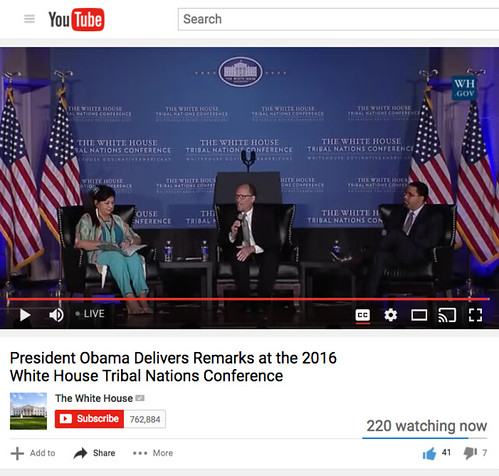