As the 22nd session of the Conference of the Parties (COP 22) comes an end, it’s a good time to ask if there are ways to improve the UN’s Climate Change Conferences.

Saleemul Huq, director of the International Centre for Climate Change and Development at the Independent University of Bangladesh, proposes a radical re-think of the purpose as well as format of this annual climate change jamboree.

“My proposal is that from now on we should consider putting the implementers in the middle and the negotiators on the periphery. Thus after the opening formal plenary is over the plenary halls are allocated to implementers to showcase their actions (which could be selected through a process of applications ) while the Negotiators are relegated to the side event rooms. Also when the ministers arrive for the high level segment instead of letting them give speeches make them sit on the podium and answer questions from the people, perhaps in a Town Hall style format,” Huq writes in his Climate Home essay Why it’s time to radically overhaul UN climate summits.

Such a holistic revision of the event’s story and narrative would be a welcome change. I would recommend that in addition to alterations made on the ground of the host city, more encouragement needs to be given to satellite events and viewing parties around the planet. The fact is most of humanity is disconnected from the proceedings. The narrative and stories from the event are parceled out in terms of unengaging bureaucratic profiles and unintelligible documents. What if what we are doing and learning could be part and parcel of the summit?

Huq concludes: “The global size of the climate change problem, which has become reality on the ground around the world, while we have been negotiating for 22 years requires a radical re-think about the purpose and format of the annual gathering of tens of thousands of people from all countries of the world to focus on actions rather than just negotiating about action.”

Whether we are discussing climate change or biodiversity conservation, the time is now to make these critical events more engaging and meaningful to humanity or face the consequences of lackluster storytelling and inaction in the near future. 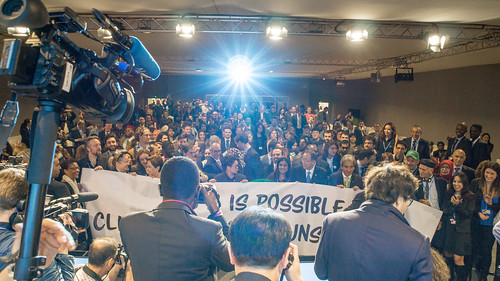