The need for food assistance remains a problem in America.

On Saturday, May 13, the National Association of Letter Carriers’ Food Drive will spread out across America to help provide assistance to Americans who are struggling with hunger.

The food drive encourages the donation of non-perishable food items. Donors leave the items by the mailbox or deliver the goods to the local post office.

Letter carriers will be ready for it, NALC President Fredric Rolando said. “Preparation and coordination for Food Drive Day can be challenging,” he said. “Despite the challenges, we look forward to it each year because of the important role we’re playing in the fight against hunger in this country.”

As letter carriers are keenly aware, too many of our customers live in challenging situations, uncertain of where their next meal will come.

“We deliver to every address in America at least six days a week,” Rolando said, “and because we’re such a consistent and familiar presence in neighborhoods, we’re all too familiar with the unfortunate reality of ongoing hunger.”

Over the last 24 national food drives, letter carriers have collected more than 1.5 billion pounds of food, helped by untold thousands of fellow postal employees, retired letter carriers, family members and friends. The food is then distributed to local food pantries within the same communities where it was collected. (As we celebrate the 25th anniversary of the food drive, read more about its fascinating history here.)

Picture perfect: Action photos, video clips and news media items from the food drive also should be forwarded to Headquarters as soon as possible. If you’re planning to use your smartphone to take videos or photos of food drive volunteers in action, be sure to hold your phone camera horizontally (landscape) and as steady as possible.

You can upload your photos easily by dragging and dropping the files into this special Hightail “cloud” folder—no user name or password required. Once you get on the site, it’s self-explanatory. And you’ll help us out tremendously if you include a message with your photos that tells us your branch name and number as well as the name of the city where your photos were taken. 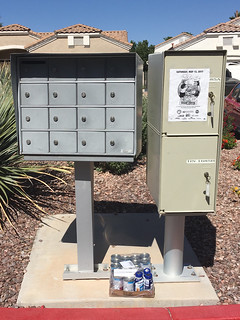