Can stacked, day-glo boulders be an inspired roadside attraction? Yes, with free admission. For those visiting (or living in Las Vegas) Seven Magic Mountains has been a go-to, whimsical delight since May 11, 2016. Blue Highway travel meets a kaleidoscope of colors.

Essay
Honestly, I never heard of the concept of Land Art before this installation. It also introduced me to instagrammable places.

There is a dirt path that connects the parking lot to the sculptures. All of the visitors appear to be in jovial moods.  No one stays too long. According to Google, the average visit is about 25 minutes.

From photos it may be difficult to assess the physical presence and surprise these granite hoodoos manifest on the Jean Dry Lake. From the highway, the sculpture seem small, perhaps the size of aquarium pebbles. They aren’t. The limestone boulders are stacked in to 30 foot towers, about the height of a two-story house.

Attention travelers on I-15, Los Angeles to Las Vegas. Be tempted by this multi-colored photo opportunity – touristy without apology, trending in an oh so cool way. Slow travelers, this is the place to stretch your legs and people watch. From the highway, look for the installation at Mile 18 on I-15. Unlike many of the other things to do in Las Vegas, the parking here is free.

Other considerations
Watch out for venomous snakes

Observations
The installation is dog- and drone-friendly.

Windy days are dusty days. Avoid going when there are gusts.
We see more stickers on the gates than graffiti on the stones.

Quotes
Most people don’t know how beautiful the land is around Las Vegas, so I hope this inspires them to explore the city’s nature.
– Ugo Rondinone, quoted in the Hollywood Reporter

Visible across the desert landscape along Interstate 15, Seven Magic Mountains offers a creative critique of the simulacra of destinations like Las Vegas. According to Rondinone, the location is physically and symbolically mid-way between the natural and the artificial: the natural is expressed by the mountain ranges, desert, and Jean Dry Lake backdrop, and the artificial is expressed by the highway and the constant flow of traffic between Los Angeles and Las Vegas.

Seven Magic Mountains is produced by the Art Production Fund, New York and Nevada Museum of Art, Reno. Approximately 10 miles south of the intersection of Las Vegas Boulevard and St. Rose Parkway in Henderson, the installation site is a short distance from Jean Dry Lake where Michael Heizer and Jean Tinquely created legendary land art works in the 1960s. Many of the project’s public programs will take place at ARIA Resort and Casino, and partner locations in Nevada, including the Marjorie Barrick Museum on the campus of the University of Nevada, Las Vegas.”

Consul General Urs Wuest sharing the #Swiss efforts in #Sustainability and how Switzerland and US work together! #SwissTouch #7MagicMountains pic.twitter.com/cV4z3Qwan0

It's not a photo shoot without a #boomerang! FOUR MORE DAYS until the 2017 season! #UsNowLV @UNLVtickets pic.twitter.com/6mqgBFIz1N 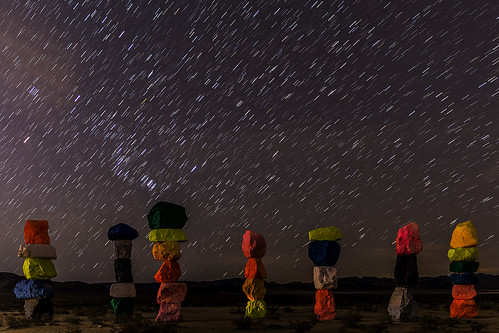 Extension
The exhibition opened May 11, 2016, and was originally scheduled to be on view for two years. Due to the incredible success of Seven Magic Mountains since its opening, artist Ugo Rondinone has expressed a strong desire to explore ways to keep the artwork on view at its current site. The Producers continue to work on an extension plan that would enable Seven Magic Mountains to remain on view for several years into the future. At the end of 2018, the Bureau of Land Management (BLM) issued a three-year permit extension for the artwork, allowing the installation to remain on view through the end of 2021.