Extinction = the state or process of a species, family, or larger group being or becoming extinct.

Extinct Symbol
The symbol represents extinction. The circle signifies the planet, while the hourglass inside serves as a warning that time is rapidly running out for many species. The world is currently undergoing a mass extinction event, and this symbol is intended to help raise awareness of the urgent need for change in order to address this crisis. Estimates are that somewhere between 30,000 and 140,000 species are becoming extinct every year in what scientists have named the Holocene, or Sixth Mass Extinction. This ongoing process of destruction is being caused by the impact of human activity. Within the next few decades approximately 50% of all species that now exist will have become extinct. Such a catastrophic loss of biodiversity is highly likely to cause widespread ecosystem collapse and consequently render the planet uninhabitable for humans.
https://twitter.com/extinctsymbol

Recommended Listening
The meaning of extinction – What does it mean to become extinct? 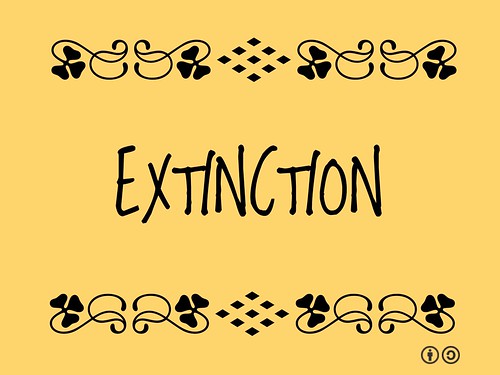