Jeopardy Clue: This word for a process that leads to a solution to a problem comes from the Arabic name of a 9th century mathematician.

Quotes
The modern word algorithm is derived from the name, al-Khwarizmi, the best mathematician of his age, thanks to his book, al-Kitab al-mukhtasar fi Hisab al-jabr w’al-muqabala, (a book showing how to solve equations and problems derived from ordinary life) which means “The Compendious Book on Calculation by Completion and Balancing”
– Al-Khwarizmi: the Father of Algebra

Algorisky – From Google search to Facebook news, algorithms shape our online experience. But like us, algorithms are flawed. Whether intentional or not, we write biases into code. Now, more than ever, it’s up to us to push for accountability. Because when bad code spreads disinformation, it’s never something that “the algorithm did.” It’s something people did. Veronica Belmont investigates algorithmic accountability, in conversation with Luke Dormehl, Staci Burns, James Bridle, Nick Seaver, and Safiya Noble.

Roofdog
How trustworthy are algorithms that are not public? = ¿Qué tan confiable son algoritmos que no son públicas? 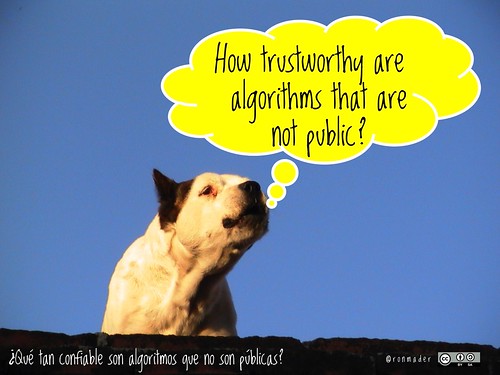 #NZ: Government moves to establish an "Algorithm charter" in an effort to make algorithms more transparent and accountable — as well as providing safe-guards such as human oversight where algorithms are used to make decisions about people's lives https://t.co/mC7pzYu9Ip