Located in the state of Campeche, on the border of Quintana Roo and Guatemala, the Calakmul Biosphere Reserve is one of the largest protected areas in Mexico, covering more than 14 percent of the state.

Calakmul is Mexico’s grand eco-archaeological experiment. The 723,185 hectares (1,786,266 acres) reserve surrounds the ruins of what may be the largest city built by the Maya, and if you want to combine bird watching or treks with archaeology – this is the place to start. It hasn’t always been so accessible. In 1993 the Mexican government paved a road through the forest to facilitate excavations in the ruins. This road allows easy access from Cancún or Mérida. And slowly this reserve is being highlighted on the tourist trail. If you go, the best time to visit is during the dry season that runs from November through March.

In 1989 President Carlos Salinas de Gortari declared Calakmul a biosphere reserve. In a watershed agreement, Mexico’s federal government transferred the management of the reserve to the state of Campeche, which agreed to jointly administer the park with the environmental group Pronatura Yucatán. In 1993 the reserve became part of the Man and the Biosphere Program. Calakmul will be joined by Guatemala’s Maya Biosphere Reserve and Belize’s Río Bravo conservation area to form the proposed international Maya Peace Park, which will attempt to protect the remaining forests in the Petén.

It’s easy to visualize the scope of the reserve. From the top of the pyramid here, you can see across the border into Guatemala.

There are more than 6,000 archaeological structures in Calakmul, 120 stelae, a mural 6 meters high, and two tombs. The Great Acropolis of Calakmul is home to a ball court and a residential area. Occupation dates from the pre-classic (70-600 B.C.) to the classic period (A.D. 900). At its height, the city of 60,000 inhabitants was larger than either Palenque or Tikal at their zeniths. The civilization crashed, some say, because of heavy deforestation.

Ten endangered species of large mammals live in the reserve, including five of the six felines found in Mexico. Nearly all are nocturnal. You may come across their tracks but sightings are uncommon. There are also anteaters, tapirs, white-lipped peccaries, and two species of deer. At least 30 different species of birds of prey, including the king vulture and ornate hawk-eagle, make their home here, as well as the great curassow, ocellated turkey, and another 300 species of birds. The count is climbing as research continues.

Nearby
Xpujil, occupied by the Maya since A.D. 400, serves as one gateway to the Calakmul Biosphere Reserve. The area does not receive many tourists, but in 1993 cabañas were built behind the local restaurant. The ruins of the ancient city are on the outskirts of the town.

There are numerous attractions nearby. The greatest concentration of blue-crowned motmots in the Yucatán are found near Xpujil. The Río Bec archaeological site is only 15 kilometers (9 miles) south of Xpujil, but it’s a two-hour drive by four-wheel-drive vehicle. A few kilometers north of Xpujil is the town of Zoh Laguna, which boasts a small zoo with native fauna including an ocelot and pumas.

Living in Calakmul
Population growth is the greatest threat to the reserve, and there continues to be considerable in-migration, particularly from the state of Chiapas. The major land uses within the area include logging, small-scale farming, and chicle extraction. Resources from the reserve are used by the surrounding 27 ejidos in both sustainable and non-sustainable manners.

Nearly 50 percent of the reserve is ejido property. The other half belongs to the federal government. There are 23,740 inhabitants in the region, 4,000 who live in the reserve, another 6,000 who depend on the forest products of the reserve, and another 13,000 who live in the surrounding area. The principle economic activity consists of farming and the cultivation of corn, beans, and squash, in addition to commercial production of the jalapeño and chipotle chiles.

Various strategies are being pursued to boost the livelihoods of the local Maya. These are the people who in fact have been guarding and protecting the ruins and the forests. The Canadian government is providing technical expertise in the creation of a model forest. This would not preclude forestry, but aim toward sustainable harvests – often ignored in the competitive world marketplace. 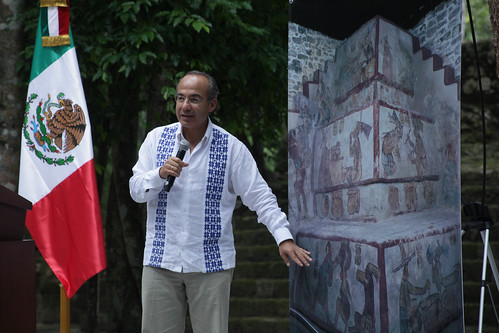