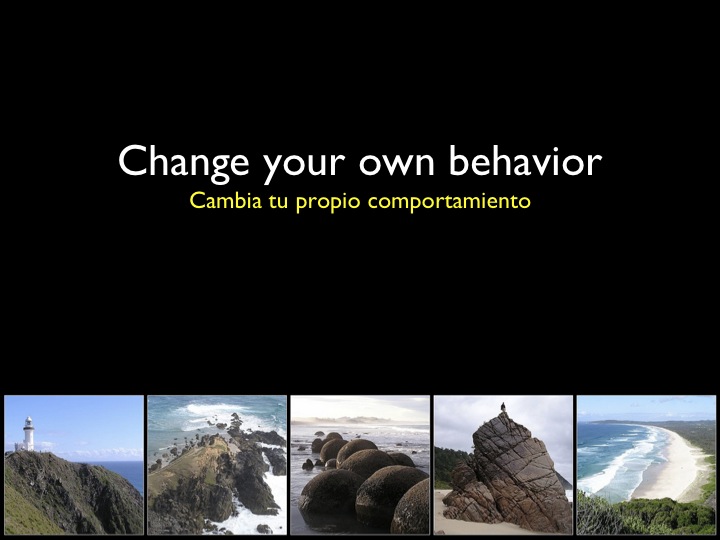 Poster: Change your own behavior (Some rights reserved)

It is not the strongest of the species that survive nor the most intelligent, but those most adaptive to change.
– Charles Darwin

You cannot step into the same river twice, for fresh waters are ever flowing in upon you.
– Heraclitus

If you want to change the mind of a politician, then you must first change the minds of their voters. Having a quiet chat with the Minister, or even the Prime Minister, will have little effect if the electorate is uncertain or opposed. The same applies particularly to global issues. If you want to change the prevailing do nothing attitudes of the majority of the world’s governments towards the enormous issues that confront us, you must first change the mindset of the human race at large.
– Julian Cribb, The case of open science

If you want to change the way people think, you can educate them, brainwash them, bribe them, drug them. Or you can teach them a few carefully chosen new words with the power to change the way you see the world (or as the Germans would say, these words might warp your Weltanschauung).
– Howard Rheingold, They Have a Word for It

Never doubt that a small group of thoughtful, committed citizens can change the world. Indeed, it’s the only thing that ever has.
– Margaret Meade

There is always hope. The world can change, again, does change for the better because of the countless acts of goodness and courage by people too often dismissed as everyday and ordinary. And it will change because the people want it. And in the end the people will endure in that.
– Richard Flanagan

Wake up all the teachers time to teach a new way
Maybe then they’ll listen to whatcha have to say
Cause they’re the ones who’s coming up and the world is in their hands
when you teach the children teach ’em the very best you can.
– Harold Melvin, Peace

When you say to yourself, ‘That’s the way I am am,’ you imply there is no possibility of change. Analysis is, in this sense, almost always pessimistic. Focusing, by contrast, is optimistic. It is based on the very positive expectation of change. It doesn’t envision a human being as a fixed structure whose shape can be analyzed once and for all. It envisions a person as a process, capable of continual change and forward movement. This ‘problem’ inside you are only those parts of the process that have been stopped and the aim of focusing is to unstop them and get the process moving again.
– Eugene Gendlin, Focusing

Knowledge is not the conformity of the mind to the given but an immersion in the process of transformation and construction of a new world.
– Gustavo Gutierrez

When you know you are listened to, everything changes.
– Conversation

You never change things by fighting the existing reality. To change something, build a new model that makes the existing model obsolete.
– R. Buckminster Fuller

Transformation comes more from pursuing profound questions than seeking practical answers.
– Peter Block, The Answer to How is Yes

If you don’t like something, change it. If you can’t change it, change your attitude.
– Maya Angelou

This is the new stuff.
– Peter Gabriel, So

Not only did we fail to imagine what the Web would become, we still don’t see it today! We are blind to the miracle it has blossomed into. And as a result of ignoring what the Web really is, we are likely to miss what it will grow into over the next 10 years.
– Kevin Kelly, Wired

The oppressed must realize that they fight not merely for freedom from hunger, but for … freedom to create and to construct, to wonder and to venture.
– Paulo Freire, quoted in Original Blessing

It is never too late to become what you might have been.
– George Eliot

It is probably true quite generally that in the history of human thinking the most fruitful developments frequently take place at those points where two different lines of thought meet. These lines may have their roots in quite different parts of human nature, in different times or different cultural environments or different religious traditions: hence if they actually meet, that is, if they are at least so much related to each other that a real interaction can take place, then one may hope that new and interesting developments may follow.
– Werner Heisenberg

Be the change you wish to see in the world.
– Mahatma Gandhi

Nothing endures but change.
– Heraclitus

These activists are quite serious in their desire to disrupt the current economic order, but their tactics reflect a dogged refusal to engage in classic power struggles: their goal is not to take power for themselves but to challenge the power centralization on principal.
– Naomi Klein, Writing the World on Globalization

I put a dollar in one of those change machines. Nothing changed.
– George Carlin