September 24-October 5
The 17th meeting of the Conference of the Parties to CITES (CoP17) takes place in Johannesburg, South Africa.

How do we watch archived video?
Are press conferences streamed live?
Are photos or artwork with a Creative Commons attribution license available on Flickr?
Does @CITES maintain a public Twitter list of participants?
How is the CITES COP host venue selected?

The Conference of the Parties (CoP) to CITES is the ultimate decision-making body of the Convention and comprises all its Parties. It is also known as the ‘World Wildlife Conference’.

At each regular meeting of the CoP, Parties submit proposals based on an agreed set of biological and trade criteria to help determine whether a species should be included in Appendices I or II or to amend the listing of a species in these two Appendices. Proposals are discussed and then submitted for decision.

The CoP is attended by designated government officials coming from multiple different ministries, such as those responsible for environment, fisheries, forestry, agriculture etc. or foreign affairs They take part in discussions based upon their respective countries’ position on particular proposals and decisions. Regular meetings of the CITES CoP takes place every three years.

How does CITES CoP work?
Every three years, the rules which govern CITES are debated and agreed on at its Conference of the Parties (CoP). Prior to each CoP, Parties can submit proposals for amending the three Appendices or existing resolutions or proposals to adopt new decisions and resolutions as well as to amend the rules of procedure. The cut-off date for countries to submit proposals for inclusion on the #CoP17 agenda was April 27 this year. The provisional agenda and the list of Proposals offers a good indication of some of the key issues that are likely to be debated at the Convention. At the CoP, the Proposals are discussed in Committees and then decided upon, by consensus or by a vote, if there is no consensus. Most of the Proposals involve requests to either elevate or demote species from one Appendix to another. Decisions are taken on every Proposal in Committees. They go to Plenary for formal adoption but can only be reopened if one third of Parties request it to be opened. Decisions taken at #CoP17 will find their way into legislation, regulation, and operating practices across the globe. 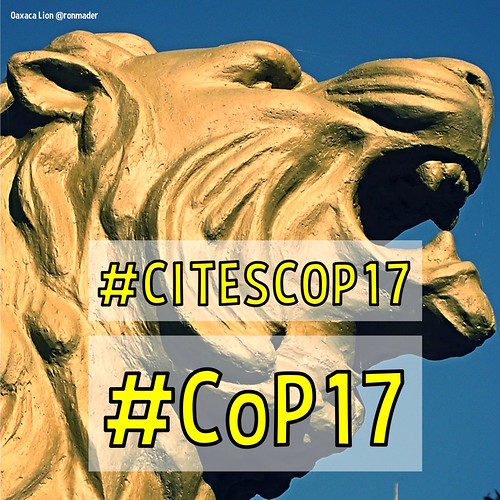 One of the key pillars of People& Parks is combatting poaching of endangered species of fauna and flora. #CoP17 #CITESCoP17

@EZEMVELOKZNWild shares one of the ways People &Parks is involving communities in conservation. #CoP17 #CITESCoP17 pic.twitter.com/xACVzvYGpB

This pangolin in a hat is telling CITES #CoP17 that his species belong in the wild. Ban international pangolin trade NOW @CITESCoP17 @IISDRS pic.twitter.com/rOhBU934I0

Our #lions deserve better from @CITES @John_CITES
To not list lions #Appendix1 is injustice of highest order. Will lead to further losses! https://t.co/Rh0nfSDHog

Botswana "will not be doing anything other than the right thing," when it comes to protecting lions. Urging for Appx I listing @CITES #CoP17 pic.twitter.com/mUnCdvSBfa

Don't forget to visit Eddie & Whitney at the shop in the public exhibition area for the must-have conference curios. #CITESCoP17 #CoP17 pic.twitter.com/1b5lUYcyNc

Expect fewer updates from #CITESCoP17 over next 48H. Main sessions in recess 'til Sunday to let working groups do their thing on key issues.

Governments at CITES #CoP17 agree in Committee to close domestic markets of #elephant #ivory that contribute to #poaching or illegal trade pic.twitter.com/kkE868mttz