The United Nations Climate Change Conferences are yearly conferences held in the framework of the United Nations Framework Convention on Climate Change (UNFCCC). They serve as the formal meeting of the UNFCCC Parties (Conference of the Parties, COP) to assess progress in dealing with climate change, and beginning in the mid-1990s, to negotiate the Kyoto Protocol to establish legally binding obligations for developed countries to reduce their greenhouse gas emissions.

The first UN Climate Change Conference was held in 1995 in Berlin.

Quotes
The global size of the climate change problem requires a radical re-think about the purpose and format of the annual gathering of tens of thousands of people from all countries of the world to focus on actions rather than just negotiating about action. – @SaleemulHuq, Why it’s time to radically overhaul UN climate summits 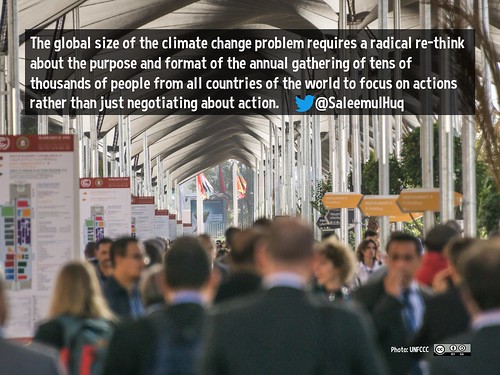