Consultation – Process by which the public’s input on matters affecting them is sought. Its main goals are in improving the efficiency, transparency and public involvement in large-scale projects or laws and policies.

Essay
Consultation usually involves notification (to publicize the matter to be consulted on), consultation (a two-way flow of information and opinion exchange) as well as participation (involving interest groups in the drafting of policy or legislation).

Consultation without the ability for those consulted to play an active role in decision making is just sharing ideas. Often destination communities are involved in what is marketed as consultation when really the developer just wants to get buy in to what they’ve already decided to do and say they’ve ‘consulted.’

Consultation is often used to collect or mine information from farmers, local communities or others with useful expertise. Often this knowledge is taken without any acknowledgement of those who gave it, generally for free. In some consultation exercises all the contributions are reported and acknowledged, even where the individual or organizing does not get the feedback they desired. This is particularly easy to do with a wiki.

In other consultation processes it is a one-way street, the ideas are taken without acknowledgement, those which do not accord with the views of those undertaking the consultation exercise are discarded and the organisation reports that it has talked to xxxx individuals without reporting how many supported their proposals and the dissenting voice is silenced.

When considering whether or not to participate in a consultation consider whether by doing so you are doing any more than giving away useful information and legitimating something you will regret. You may only be being used.

Also see: Nonsultation = A specious public consultation on decisions that have already been made. 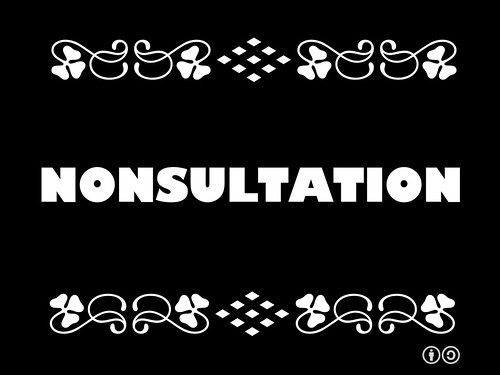 Elsewhere on the Web
Public consultations – Australian Government
On #OccupyWallStreet and the Power of Open Source and Consensual Processes
Oxfam: Guide to Free Prior and Informed Consent

Quotes
You don’t have to know the answers. You don’t even have to know the questions. What you need to do for successful consultation is to know how to build trust, show respect, listen and not be hurried.
– Anthony Hillin, Walking the path together

When you can’t reach consensus, neither idea is the right idea. You have to mutually reach the third idea.
– Damon Lindelof, Adam Savage Interviews Damon Lindelof