Kudos to all our friends in South Africa. From a comfortable distance, we loved the siren song of the vuvuzela and its unmistakable sound of the World Cup.

There were many online guides to the 2010 World Cup, but few that highlighted the nerdier aspects of Web 2.0 integration, the local travel movement, responsible travel and ecotourism options in South Africa. This wiki page features iphone applications, a google map of the stadium locations and other nerdy mashups. Most importantly we are keeping track of event analysis.

We are pleased to share conversations with Kurt Ackermann in Cape Town. In fact, we’re preparing an entire south africa playlist.

Key findings:
more than 309,000 tourists arrived in South Africa for the sole purpose of attending the competition, giving the local economy a boost of R3.6 billion – as well as raising the profile of South Africa as a sought-after tourist destination.

From wogball to a national game: soccer and multiculturalism

The 2010 football World Cup is underway in South Africa, but behind the glitz and excitement the country is still mired by profound inequality. Will the World Cup have a trickle-down effect on the nation’s poor, or are the new stadiums going to be a long-term drain on resources?

Loeries give Fifa the bird

prior coverage (including sensationalistic titles)

Why going to South Africa for the World Cup terrifies me

10 Stadiums and 10 places of interest to the ecotourist

Click on the markers to see what could be of interest to the ecotourist attending the World Cup or visiting South Africa anytime later! 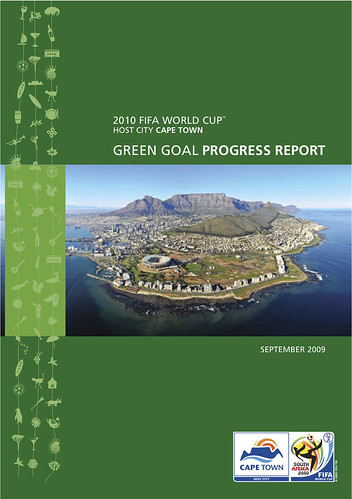 32 teams qualified for the final tournament:

It’s not often you can participate in a truly global event, where mass interest creates an extraordinary shared focus. Football does it. More than the Olympics, more than space missions (though Apollo 11 must have come close) more than the great religious pilgrimages, the finals tournament of the FIFA World Cup has a planetary audience. It’s a show so popular the organisers look forward to more than four billion dollars profit, as sponsors pay through the nose for that many eyes and ears.
Fervour and favours in the football world – ABC

One game changes everything.
– ESPN

Seven of the eight American teams advanced to the Round of 16 (only Honduras went home) and five of these seven teams were group leaders. Europe went 5 for 13.

Spain became first team to lose its first game but still make it out of the group stage. Eight of the 10 teams to win its first game reached the Round of 16, but one of those (South Korea) has already been sent home.

The soccer world cup 2010 ball is called Jabulani. In Zulu language it means ‘to celebrate.’

90 million people in the USA are actively involved in soccer.

La ley de dos pies = Law of two feet: If people find themselves in situations where they are neither learning nor contributing, they are responsible for moving to another place, using their two feet to find a place where participation is more meaningful.
https://www.planeta.com/ost