In 2019  Planeta.com launched our spotlight on the 500th anniversary of the Spanish conquest of the Aztec Empire. We will follow the timeline of the expedition led by Hernán Cortés.

Headlines
The forgotten colonizer – Universal
On the trail – Economist

Wikipedia: Hernán Cortés de Monroy y Pizarro Altamirano, Marquis of the Valley of Oaxaca; 1485 – December 2, 1547) was a Spanish Conquistador who led an expedition that caused the fall of the Aztec Empire and brought large portions of what is now mainland Mexico under the rule of the King of Castile in the early 16th century. Cortés was part of the generation of Spanish colonizers who began the first phase of the Spanish colonization of the Americas.

Images
British Library: Hernando Cortes landing in Mexico in 1519, met by natives; with foliate borders and a portrait of Cortes in a medallion.’ 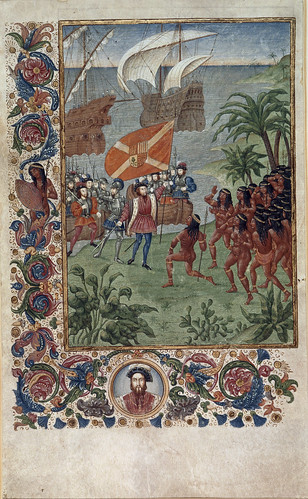 One thought on “Hernán Cortés”