Interstate 11 (I-11) is an Interstate Highway in the U.S. state of Nevada that follows U.S. Route 93 (US 93) and US 95, officially designated by the United States Congress in the 2015 Fixing America’s Surface Transportation Act. Near Boulder City, Nevada, the first two-and-a-half-mile (4.0 km) southbound segment was opened on August 16, 2017, and its accompanying northbound segment on January 27, 2018. It is tentatively planned to run from Nogales, Arizona, to Reno, Nevada, along the current routes of I-19, I-10, US 93 and US 95. – Wikipedia

The Nevada Department of Transportation in partnership with the Regional Transportation Commission of Southern Nevada are on the forefront of milestones in completing construction of the first phase of Interstate 11 that will officially receive the Interstate 11 shield signs along the freeway.

The first phase of I-11 construction will install approximately 15 miles of new freeway around the southern perimeter of Boulder City from I-515 to U.S. Highway 93. At the eastern end, the project connects to the Hoover Dam Bypass project which was completed in 2010. The Hoover Dam Bypass project included the Mike O’Callaghan-Pat Tillman Memorial bridge. At the western end, the project connects to the existing I-515 freeway entering the Las Vegas Valley from the south.

The project is being constructed in two phases simultaneously. NDOT is managing a 3.5 mile segment and the RTC is managing a 12-mile segment. The project will include the design and construction of a four-lane access-controlled freeway with new interchanges at I-11/US 95, I-11/US 93 and a reconfigured interchange at the US 93/State Route 172 Hoover Dam Exit.

To learn more about the I-11 study, please click here.

Project Benefits
Las Vegas and Phoenix are the only two cities in the nation with populations more than one million people that are not currently linked by an interstate. Once constructed, the first phase of Interstate 11 will relieve congestion, improve safety and enhance travel and commerce between Arizona and Nevada. Construction of the project will create and estimated 4,000 direct and indirect and induced jobs in the region.

The Project accomplishes major feats in (1) constructing a scenic view parking area within the Eldorado Mountains overlooking Lake Mead (2) constructing a railroad bridge that reconnects a railway that was severed between Las Vegas and Boulder City (3) connecting two major bicycling routes between City of Henderson and the River Mountain Loop Trail and (4) constructing wildlife crossing to protect the big horn sheep.

The steel decorative sculptures attached to a 1,200-foot-long retaining wall on the south side of I-11 pay tribute to the workers and equipment used during the construction of Hoover Dam between 1931 and 1936. The design was decided upon following numerous public meetings involving nearby residents and stakeholders. You can learn about the history behind the décor here.

NDOT is also replanting 20,000 cacti that were displaced during the excavation of the I-11 corridor roadbed. Falling in line with the department’s efforts to protect the desert tortoise, five miles of tortoise fencing was installed as well as culverts that provide underpasses for the endangered tortoises. 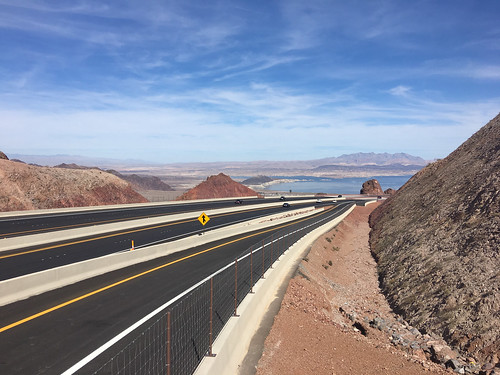