Planeta.com’s Ron Mader has been selected as the 2010 Innovation Award Winner and will receive the award at the closing reception of the ESTC 2010 Conference in Portland, Oregon.

Said TIES’ Director of Communication Ayako Ezaki, “All of us on TIES team have been very impressed with your great work with the Indigenous Tourism Biodiversity Website Award, and your leadership in communication and awareness-building initiatives highlighting best practice examples of Indigenous tourism and important issues facing Indigenous communities around the world. Thank you for your invaluable contributions to conservation, communities and sustainable travel, and for your continued efforts to bring sustainability to the forefront of the tourism industry worldwide.”

Ron’s Nomination
It is a challenge to nominate oneself for an award, but I think my involvement in the Indigenous Tourism and Biodiversity Website Award is a good example of innovation and I submit the following information. Plus I have learned from the ITBW Award participants that one has to talk up one’s own efforts. There’s a Mexican proverb that comes to mind:

No es suficiente poner el huevo, es necesario cacarearlo.
It’s not enough to lay an egg. You have to crow about it.

We started the work in early 2008 as I posted a query on the Planeta Forum to see how such an award could be developed. Discussion led to the first award in 2009 and continued in 2010 with the generous support of the Heidehof Foundation. This award will be presented at the ESTC 2010 Conference and will be followed by a full-day Social Web Workshop.

My work was to coach and animate the nominees so they could improve their web presence using traditional ‘home pages’ and social channels. I also kept the organizers and judges in the loop through the entire process.

To see examples of the Web 2.0 in action set in motion by the award, check out the ITBW Twitter List of nominees, jury and organizers. The list is updated automatically every time one of the participants tweets! Another example is the Flickr album featuring the award’s artwork and nominee screenshots. The album documents the variety of options employed by the nominees and the steady development of Web 2.0 skills. One more must-see are the videos posted on YouTube. The ITBW playlist is going viral!

More than one nominee confessed that they were on the learning curve when it came to development a presence on Web 2.0 channels such as Facebook, Flickr and Twitter. These skills are critical as they help level the playing field allowing the news and perceptions of locals to be shared with the world. To be honest, we are all on this learning curve and awards help illuminate the way forward.

On a sidenote, parallel to my work coaching and instructing the nominees around the world, I have been working with Indigenous peoples in Oaxaca, training folks in Web 2.0, aka the Social Web.

skills in a series of workshops that have developed the skills among artisans, market vendors, hotel owners and tourism guides alike. The ‘awards’ that will be presented to ITBW winners are folk art purchased from Oaxacan artisans. I also purchased the rights to use the photo of sunrise in a wilderness area for use in the ITBW presentation from a weaver and aspiring photographer. This past month we arranged an exhibition of her photos and her family’s weavings at the Comala Restaurant. This is the best way I know to integrate (aka weave) the online and natural worlds. 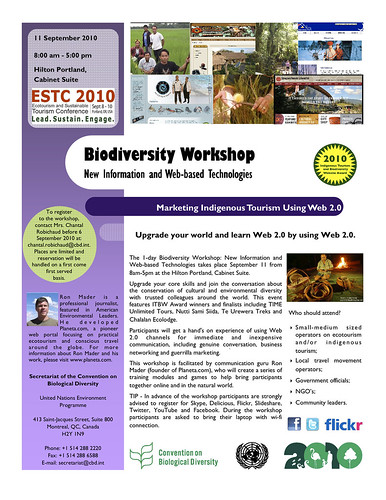