World Heritage
UNESCO: Ischigualasto-Talampaya Natural Parks are located in the northern part of central Argentina comprised of two adjoining protected areas. These are Ischigualasto Provincial Park (60,369 hectares) in San Juan Province and Talampaya National Park (215,000 hectares) in Rioja Province, jointly covering 275,369 hectares west of the Sierras Pampeanas. The property is situated within Argentina’s Monte ecoregion, a warm scrub desert along the Eastern Andean foothills. Against the backdrop of an attractive mountain landscape the property is a scientific treasure of global importance. It harbours the sedimentary Ischigualasto-Villa Union Triassic Basin, consisting of continental sediments deposited during the entire Triassic Period. This Basin boasts an exceptionally complete record and sequence of plant and animal life in the geological period from roughly 250 to 200 million years ago which represents the origin of both dinosaurs and mammals. Six distinct sedimentary formations contain the fossilised remains of a wide range of ancestral animals and plants revealing the evolution of vertebrates and detailed information on palaeo environments over the approximately 50 million years of the Triassic Period, and the dawn of the “Age of the Dinosaurs”. The ongoing scientific discoveries are invaluable for understanding palaeontology and evolutionary biology.

Talampaya National Park is located in the east/centre of La Rioja Province, Argentina. It was designated a provincial reserve in 1975, a national park in 1997, and a UNESCO World Heritage Site in 2000.

Ischigualasto Provincial Park also called Valle de la Luna (“Valley of the Moon” or “Moon Valley”), due to its otherworldly appearance, is a provincial protected area in the north-east of San Juan Province, north-western Argentina, limiting to the north with the Talampaya National Park, in La Rioja Province.

Elsewhere on the Web
https://www.tripadvisor.com/Attraction_Review-g2431835-d2355673-Reviews-Parque_Nacional_Talampaya-Villa_Union_Province_of_La_Rioja_Cuyo.html 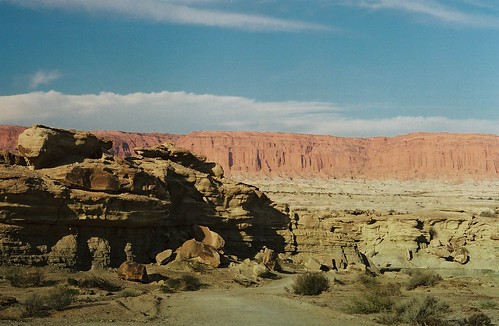