Wikipedia: Charles-Édouard Jeanneret-Gris, who was better known as Le Corbusier (October 6, 1887 – August 27, 1965), was a Swiss-French architect, designer, painter, urban planner, writer, and one of the pioneers of what is now called modern architecture. He was born in Switzerland and became a French citizen in 1930. His career spanned five decades, with his buildings constructed throughout Europe, India, and the Americas.

Brief description The Architectural Work of Le Corbusier is a transnational serial property, consisting of seventeen sites, chosen because together they represent an outstanding response to some of the fundamental issues of architecture and society in the 20th century. They were implemented over a period of half a century, in the course of what Le Corbusier himself described as “patient research”. Chosen from the work of Le Corbusier that survives in eleven countries on four continents, the sites in seven countries on three continents, are said to attest to, for the first time in the history of architecture, the internationalization of architectural practice across the entire planet. The component sites are all innovative in the way they reflect new concepts, all had a significant influence over wide geographical areas, and together they are seen to have disseminated ideas of the Modern Movement throughout the world.

The nomination is based on the idea that the Modern Movement, despite its diversity, is a major and essential socio-cultural and historical entity of the 20th century, which has to a large degree remained the basis of the architectural culture of the 21st century. It suggests that from the 1910s to the 1960s, the Modern Movement, in meeting the challenges of contemporary society, aimed to: • Instigate a unique forum of ideas at a world level; • Invent a new architectural language; • Modernize architectural techniques; • Meet the social and human needs of modern man. The series of the Architectural Works of Le Corbusier is seen to have provided an outstanding response to these challenges. The component sites have been selected to reflect how these four challenges were addressed in a particular exceptional way. From 65 buildings or groups designed by Le Corbusier that survive today, the 17 sites included in the new submission are: 1923 Maisons La Roche et Jeanneret, Paris, France 1923 Petite villa au bord du lac Léman, Corseaux, Switzerland 1924 Cité Frugès, Pessac, France 1926 Maison Guiette, Antwerp, Belgium 1927 Maisons de la Weissenhof-Siedlung, Stuttgart, Germany 1928 Villa Savoye et loge du jardinier, Poissy, France 1930 Immeuble Clarté, Geneva, Switzerland 1931 Immeuble locatif à la Porte Molitor, Paris, France 1945 Unité d’habitation, Marseille, France 1946 Manufacture à Saint-Dié, Saint-Dié-desVosges, France 1949 Maison du Docteur Curutchet, La Plata, Argentina 1950 Chapelle Notre-Dame-du-Haut, Ronchamp, France 1951 Cabanon de Le Corbusier, Roquebrune-CapMartin, France 1952 Complexe du Capitole, Chandigarh, India 1953 Couvent Sainte-Marie-de-la-Tourette, Éveux, France 1954–59 National Museum of Western Art, Main Building, Tokyo, Japan 1953–65 Centre de recréation du corps et de l’esprit de Firminy-Vert, Firminy, France These are described in relation to the four main concepts. Instigate a unique forum of ideas at a world level Some buildings immediately assumed an iconic status and attracted worldwide interests and had world-wide influence. These include the Villa Savoye, as an icon for the Modern Movement; Unité d’habitation in Marseille as a major prototype of a new housing model based on the balance between the individual and the collective; Chapelle Notre-Dame-du-Haut, Ronchamp, for its revolutionary approach to religious architecture; the Cabanon de Le Corbusier as an archetypal minimum cell based on ergonomic and functionalist approaches; and the Maisons de la Weissenhof-Siedlung became known worldwide, thanks to the resounding critical success of the Werkbund exhibition. Some buildings acted as catalysts for spreading ideas around their own regions, such as Maison Guiette, Belgium, that spurred the development of the Modern Movement in Belgium and the Netherlands; the Maison du Docteur Curutchet that exerted a fundamental influence in South America and continues to do so; the Musée National des Beaux-Arts de l’Occident in Tokyo, the prototype of the globally transposable Museum of Unlimited Growth, which cemented ideas of the Modern Movement in Japan; while the Complexe du Capitole, had a considerable influence across the Indian subcontinent, where it symbolized the country’s accession to modernity. Many of the sites reflect new architectural concepts, principles, and technical features. Examples are the minimum house, of which the Petite villa au bord du Léman, 1923, is an early expression; the minimum living cell is crystallized in the Cabanon de Le Corbusier; the five points for a new architecture are transcribed iconically in Villa Savoye; the glass-walled apartment building has its prototype in the Immeuble Molitor; and the concept of balance between the collective and the individual, as set out in the Athens Charter, has its prototype in the Unité d’habitation. –
http://whc.unesco.org/archive/2016/whc16-40com-inf8B1-en.pdf 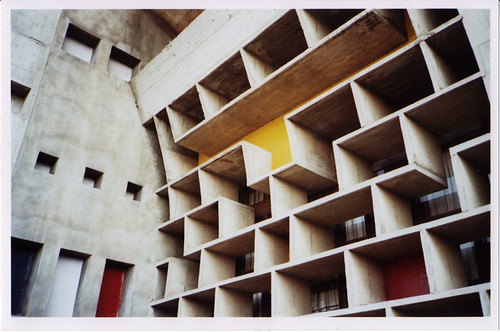