Our favorite Word of the Year (#woty) is Australia’s #macqwoty, hosted by Macquarie Dictionary.

Each year they announce a public game in January to choose the best word of the previous year. 2016 is the year of the Freecycle, Norman door, Blockchain, Post-Truth, Fake News, Driverless Car and mmmmm… bush carrots, must be Youlk!

Nominations for Word of the Year are selected from new words included in the annual update of the Macquarie Dictionary Online in 2016. The committee is provided with a list of 75 words from which they select a top 15 for public voting. Voting for the People’s Choice Word of the Year closes on Tuesday January 31 at 5:00pm AEDT.

My favorites among this year’s nominees:

Arts: Racebending = the process of altering the ethnicity of a character in a book, film, etc., for a new version of it.

Business: Digital nomad = a person who uses communications technology to make it possible for them to carry on their work in whatever location they happen to be, in contrast with the previous custom of working regular hours in a fixed office.

Colloquial: Side eye = a disdainful or scornful look.

Communications: Fake news = disinformation and hoaxes published on websites for political purposes or to drive web traffic, the incorrect information being passed along by social media.

Eating and Drinking: Spiralise = to shred (vegetables) into ribbon or noodle-like lengths which form loose curls.

Environment: Freecycle = to give away (items) so that they can be used again by others, by placing them in a public area so that people can take them away as they wish.

General Interest: Norman door = a badly designed door which does not give the user any guidance on how to open it, whether to push or pull.

Health: Patient navigator = an administrative support person who assists a patient to manage their illness and make the best use of the health system by coordinating healthcare teams and resource providers. 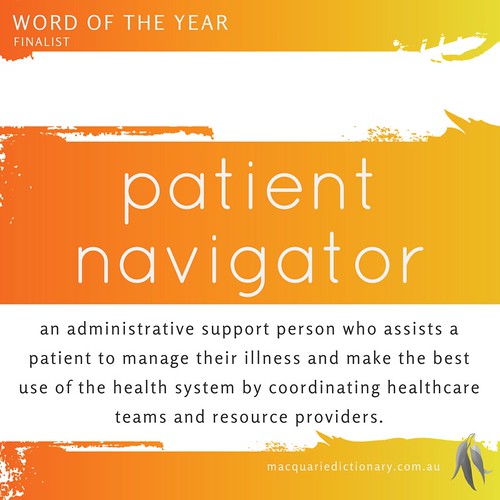 Internet: Blockchain = a software system for providing a decentralised record of transactions, as on a stock exchange, in which each participant keeps a record of all transactions ever made which is updated through peer- to-peer verification.

Politics: Post-truth = relating to a style of political debate in which the truth of what is said is unimportant by comparison with its emotional appeal to the voters.

Social interest: Free-range parenting = a parenting style in which children are encouraged to be independent, even if this results in the occasional misadventure. Compare helicopter parenting.

Technology: Driverless car = a computer-operated car which is able to drive itself on a public thoroughfare using radar, lidar, GPS, odometry, and computer vision to navigate its way safely.

Word of the Year