Bordered by the states of Baja California and Baja California Sur, Sonora, Sinaloa, and Nayarit, the Sea of Cortez (Mar de Cortés), also known as the Gulf of California (Golfo de California) is a biologically diverse area.

That said, it is nothing like the Serengeti of the sea that it was decades ago. Over fishing has reduced both the number and diversity of species.

History
Spanish explorer Francisco de Ulloa named the Sea after he sailed the perimeter in 1539 and 1540 under the orders of the man who twenty years earlier lead the conquest of the Aztec Empire, Hernan Cortes.

The Mexican government renamed it the “Gulf of California” earlier this century, though map makers appear to be divided about which name to use; “Sea of Cortez” seems to be the preferred choice of conservationists and Baja aficionados. The sea is 1,400 kilometers (868 miles) long and 210 kilometers (130 miles) across at its widest point. It is more shallow in the northern part and its salinity is higher. Further south the crust has broken and about three inches of new sea-floor are being created each year as magma extrudes to fill the growing gap between Baja California and mainland Mexico.

Because of its geological origins, the floor of the sea is one of the sheerest in the world. Underwater canyons can reach more than 3 kilometers (1.9 miles) in depth, though the average is only 1 kilometer (.62 miles). These abysses cause large tidal margins, especially in the northern half around the mouth of the Colorado River.

The coast along the Sea of Cortez is generally more tranquil than the Pacific side. The desert of the Baja Peninsula is known as the Gulf Coast Desert, an extension of the Sonoran Desert.

Islands
There are nearly 100 islands in the Sea of Cortez, 53 of them protected as a special biosphere reserve since 1978. Only a handful of the islands have official names. The largest, at 1,000 square kilometers (620 square miles), is Isla Tiburon (Shark Island).

The islands were formed primarily by submergence of the surrounding territory, though some, like Isla Coronado, were created by volcanic activity.

The islands receive only 1 inch of rainfall per year, yet they boast 3,500 species of plants, many of them found nowhere else on the planet. Half of the 120 cacti on the islands are endemic. The islands support a menagerie of animals as well, including rattlesnakes, the chuckwalla (a 2-foot-long lizard), and Cimarron goats.

There are large colonies of seabirds. Over 95 percent of the world’s Elegant Terns and Herman’s Gulls breed on Rasa Island near Bahia de los Angeles in Baja California. Other colonies include Blue-footed and Brown Boobies as well and the endangered Brown Pelican.

This warm sea may be the richest body of water in the world, with more than 800 species of marine vertebrates. The Sea receives more sunlight than any other in the world and the gigantic tides churn over the nutrient-rich water from the bottom. Among the larger visitors to the Sea are the Blue Whales, the world’s largest animals.

At the Mouth of the Colorado River
The Upper Gulf of California and the Colorado River Delta Biosphere Reserve is surrounded by the Sonoran Desert. This reserve was created to protect the native fish (shrimp, corvina, and chano, or croaker) and management of the important fisheries.

The Colorado River Delta was once the largest delta in North America, but construction of dams along the Colorado River in the United States reduced its flow to a trickle. Environmentalists have complained that U.S. agricultural interests in Imperial Valley have taken precedence over environmental management of the delta.

Overfishing
The biological wealth of the region has not gone unnoticed by the fishing industry, and certainly one of the biggest threats in the region is over fishing. Commercial ships with nets or long lines of hooks have depleted much of the stock, and the main proponents of more conservative conservation measures are coming from the sport fishing sector. The gill nets used in commercial fishing are indiscriminate in what they catch, and lost nets can become floating deathtraps.

Other ships use long-liners, which have a long line of baited hooks. These too catch fish indiscriminately and are blamed for the decline in big game fish such as marlin and yellow tail. Trawlers catch shrimp by dragging a cone-shaped net along the sea floor. However, for every pound of shrimp netted, the trawlers catch 10 pounds of other marine species, most of which die.

According to a report by the United Nations Food and Agriculture Organization (FAO), “about 70 percent of the world’s marine fish stocks are fully to heavily exploited, overexploited, depleted or slowly recovering.” Although this situation is clearly unsustainable, the commercial fishing industry appears to be doing little to mend its ways.

In an excellent series of articles about the Sea of Cortez, Sacramento Bee reporter Tom Knudson pointed out the problem with free market environmentalism. “Fishing is supposed to be done conservatively to protect stocks,” he writes. “But in poverty-stricken Mexico, another rule applies: If you will buy it, they will kill it. They will liquidate their sea.”

Elsewhere on the Web
seawatch.org

Archives
Development in Mexico: As Established Policies are Nurtured, the Hopes of Many Mexicans Wither on the Vine 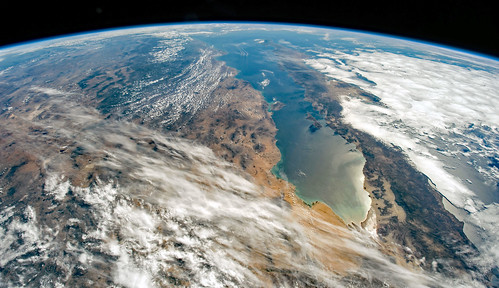