Celebrating Day of the Dead in Mexico 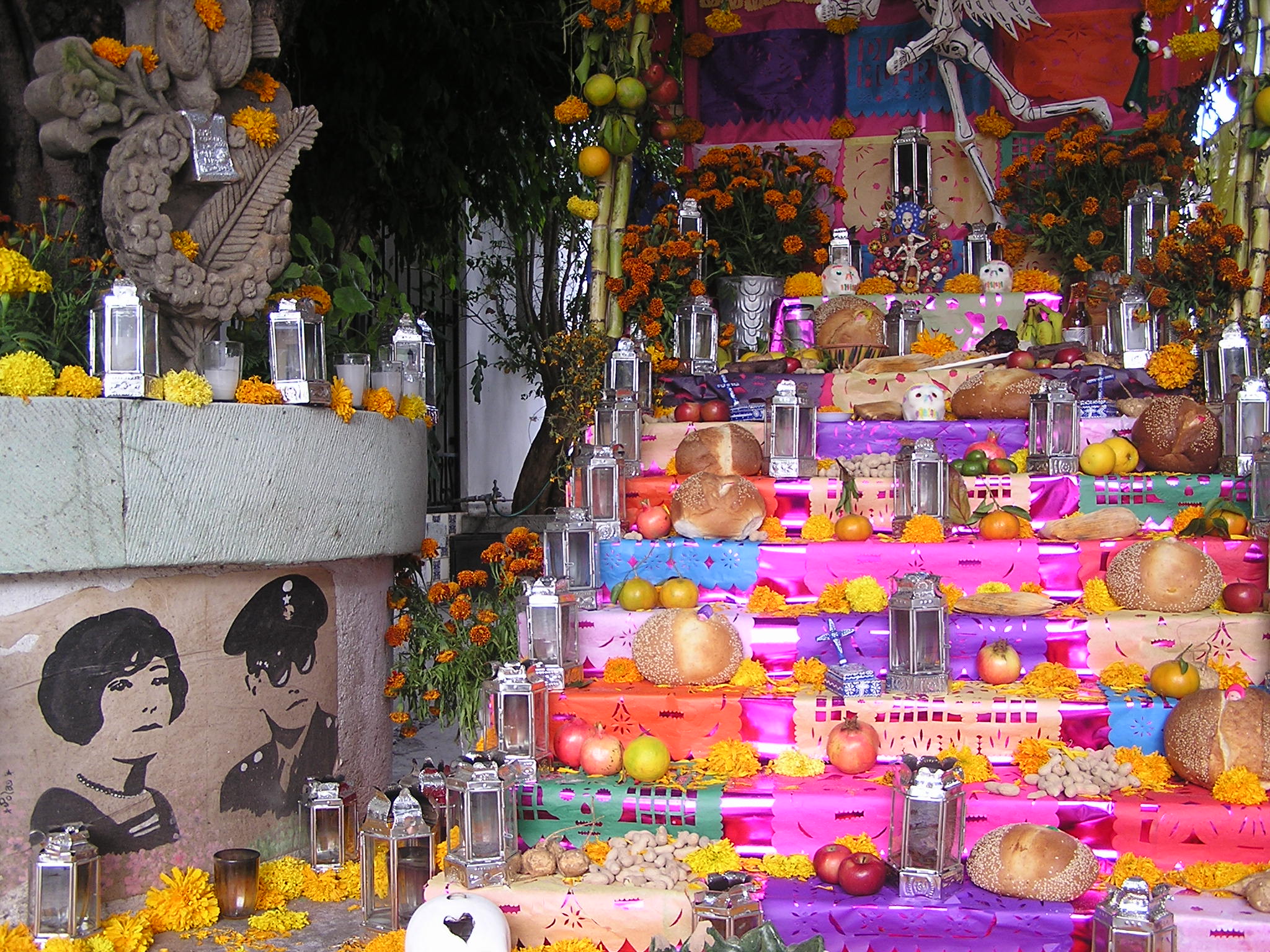 Día de los Muertos (Day of the Dead) is a holiday celebrated throughout the Americas and combines ancient Indigenous traditions and modern fanfare. It is a whimsical and yet serious holiday that takes place between October 31st and November 2nd.

Mexico may have the most spectacular festivals in the hemisphere. Well known are festivities in Oaxaca, Michoacán, and Mexico City.

While the days are the anchor of the holiday, the month before preparations begin as the rural fields blossom into flowers to be used on the altars.

Understanding
Day of the Dead is literally a world away from Halloween and has more in common with the celebration of Thanksgiving in Canada and the USA. For many Mexicans — and particularly Oaxacans — Day of the Dead is the favorite holiday of the year, easily surpassing Christmas.

The dead are not remembered or commemorated. Instead they are considered present. This is a celebration with the dead, not of the dead. Open the doors. Family is here.

Love rules the holiday as families believe that the souls of the departed return to visit living relatives. There is an abundance of food and drink, the favorites of the deceased.

Family altars are vibrant and showcase the love for deceased. The living shower the deceased with food and presents and decorate the graves and recount their stories of their loved ones. Yellow is the most visible color on the altars decorated with bright marigold flowers (cempasúchil, see photo).

A symbolic buffet of favorite food and drinks serves the deceased. Trails of marigolds lead like runway lights to guide spirits home back to their loved ones. The distinctive scent of marigolds are said to attract the spirits of the dead. Other flowers include Flor de Muerto and Cresta de Gallo (Cockscomb). Altars have candles that are important for their light and their smoke. Copal – the sap from the tree also used to make alebrijes – is burned for a sweet incense.

Harvest
Day of the Dead coincides with harvest time. The rainy season ends at the close of the hurricane season and farmers share their bounty.

Crafts and Food
Many foreigners are introduced to Day of the Dead via handicrafts, including paper mache skeletons (calacas) and candy skulls. Sweets and candy skulls are traditionally intended for the souls of departed children, who return to earth in the late afternoon of October 31.

Day of the Dead Bread (Pan de muertos) is decorated with strips of dough which appear like human bones. Bread is one of the centerpiece items on every altar. Extra loaves are shared with mortal guests.

Oaxaca
In Oaxaca, Day of the Dead is one of the biggest holidays of the year. Tours to nearby villages are conducted with respect. Travel guides and hotels arrange guided trips for guests and friends to local cemeteries.

Michoacán
One of the most famous celebrations takes place on the island of Janitzio in Lake Pátzcuaro, Michoacán.

At night, boats are decorated with candles and flowers, loaded with local villagers and visitors who are taken to the island’s cemetery. There they spend the night, summoning back the dead in celebration. There are times when the number of travelers exceeds the comfort for all.

Mexico City
Dead of the Dead altars are a focal point of many museums and public spaces. Among the most noted places to visit are the Diego Rivera Museum and the Popular Culture Museum in Coyoacan. In the southern part of the city, there is a famous celebration in the village of San Andrés Mixquic. Locals go to the graves early on September 16th to invite loved ones to the Muertos reunion.

Guanajuato
Day of the Dead is celebrated with a special touch at Guanajuato City’s Mummy Museum.

A Few Words about Jose Guadalupe Posada
Mexican artist and printmaker José Guadalupe Posada (1852-1913) used the skeleton image to comment on social inequities of his time.

Posada produced more than 900 illustrations and the most famous invariably include costumed calaveras(skeletons). His most famous drawings is that of La Catrina, an elegant lady with a feathered hat. Politicians and other legendary figures were parodied in this satirical fashion.

Quotes
The Mexican seeks for, strokes, teases, celebrates the death, sleeps with him. Perhaps he is tormented by the fear of him like the others, but he does not hide from him or conceals him. With patience, contempt or irony he looks him straight in the face.
– Octavio Paz