Overlooking Oaxaca City (elevation: 1,550 meters or 5,000 feet) on a plateau to the west lies the august archaeological site known today as Monte Albán (elevation: 1,900 meters or 3,280 feet). The city was once one of the largest in the Americas and continues to inspire visitors today.

Monte Albán was inhabited for more than 1,300 years (500 BC – 850 AD). For the legacy of cultural achievements, UNESCO declared this a World Heritage Site.

The original Zapotec name of the site was Dani Biaa (‘sacred mountain’). Zapotec culture blossomed during the Classic Period (300-750 AD), in which Monte Albán established relations with other powerful cities, namely Teotihuacán (north of present day Mexico City) and Tikal in Guatemala.

The population peaked in the period between 450-700 AD in which the city supported more than 25,000 people.

At the end of this period, the city began to decline until it was appropriated by the Mixtecs at the beginning of the 13th century. The Mixtecs constructed a few buildings and are best known for the ceremonial offerings left in Tomb #7.

Natural World
Monte Albán was built 300 meters above the valley floor and commands a spectacular view, particularly from the ridge on the northern end of the site. Naturalists have always found this sanctuary one of the best places for birding in the country. Lizards are plentiful.

Archaeology
The site is aligned on a north-south access. The entrance lies on the north-eastern side. We won’t go into many details in this brief overview, but two structures are similar to other sites in the region and merit special attention.

Ball Court
– The I-shaped ball court is located near the entrance. The ‘juego de pelota’ or Mesoamerican Ballgame played an important role in society. Other ball courts can be seen at nearby Yagul and Dainzu. A smaller, unrestored court is located across the parking lot to the west of the main site.

Building of the Dancers
– Once thoughts to represent dancers (‘danzantes’), the carvings are said to display prisoners captured in battle, mutilated and later killed. Forerunners of these figures are also found at San Jose Mogote.

Stela 18
– Nearly 6 meters high, Stela 18 is the tallest stelae found at this site. It was erected between 100 BC and 300 AD and is believed to have been used to verify the solstices and equinoxes.

Vendors
There are several dozen vendors with permission to sell stone replicas to visitors. They hike up the hill each day from the small town of San Antonio Arrazola.

Transportation – From Oaxaca City, buses depart from 8:30am-3:30pm from Autobuses Turisticos, Mina #509, across from the Hotel Rivera del Angel, 516-5327. The cost is 40 pesos. The scheduled return is about three hours after your arrival. If you need extra time — and most visitors do — you can delay your return for an additional 17 pesos — a bargain! There is also van service in the Hotel Rivera del Angel.

Access – Monte Albán is administered by the National Anthropology and History Institute (INAH) and is open daily from 8am to 5pm. The entrance fee is 52 pesos. There is an additional charge to use a video camera. No tripods are permitted. Signage is available in English, Spanish, and Zapotec. The on-site museum is one of the country’s finest. There is also a small restaurant with a panoramic view and a special grasshopper dish called ‘Nido de Grillas.’

Tip – Bring or buy a hat as there is little shade!

Nearby – There are thousands of archaeological sites in the state of Oaxaca. Those interested should also visit the sites of San José El Mogote, Mitla and Yagul. 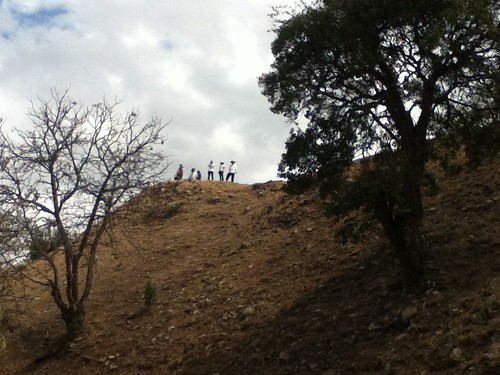