Oaxaca City, Oaxaca – Pochote Market began in November 2003 at the Pochote Cultural Center with the support of Oaxacan artist Francisco Toledo. The market moved several times in 2004 and returned to the Pochote in the fall.

What unpackaged food products are available? — Fruits and vegetables that are in season. Also shallots, lettuce and goat cheese.

Can I take coffee to another country? — Yes for most countries, including the United States. You might want to check ahead of time for specific customs regulations.

Why are the potatoes covered in dirt? — Farmers in the Sierra Juárez bring potatoes caked in soil as this is the best way to keep the taters fresh.

Where else can I find natural products? — There are many fine markets and stores.

Are the products certified? — Sort of. In 2008 the market began to use the services of Certimex to certify products. Little information is passed on to consumers. Also, many of the small mom and pop operations simply left the market rather than participate in a complicated process.

The previous attempt was in 2006-2007 in which members self-certified themselves. This also was not communicated well to the clients.

Certification in both cases focus on whether the products are organic and does not review the process of distribution or recycling nor put an emphasis on fair trade or local production.

History
In June 2005, the market divided with some of the vendors leaving and forming the Multi-Bio Cultural Organico.

In April 2006 textiles, including weavings, embroidery and rugs, were banned from the Pochote Market by the decision supposedly by the Toledo’s group with a message that the market needed to focus on food, less on folk art. A formal announcement or explanation was not made public.

2006 was a tough year given the social protests. From August-October vendors had to navigate past the barricades to sell their goods. The market never closed, but sales collapsed in the second half of 2006.

In 2008 after a tree died from a leak in the pond, hot food was banned.

In 2009 the announcement was made on May 15 that Francisco Toledo was withdrawing the use of the Pochote Cultural Center. No reasons were given for this decision. The market closed its doors at the Arquitos on August 1, three months short of its sixth anniversary. In late 2009 some of the members went to the atrium of Iglesia Xochimilco (photos) and others to Rayon #411 and Xicoténcatl (photos).

A number of current and former members have created their own stores including Xiguela, Hidalgo #105 (photos) and Yunhiz, Gonzalez Ortega #400.

Oaxaca Market Project
Pochote Market is documented in the Oaxaca Market Project, an initiative of Planeta.com and friends in Oaxaca. We ask visitors to print photos (seen here archived on Flickr) and give them to the vendors. This puts a new spin on the traditional ‘take only photographs’ mantra by giving the photos back and raising awareness and increasing purchases of traditional crafts and local food.

What might be a rushed visit becomes a search for familiar faces and seasonal products. This guide encourages you to learn about the markets before a visit. Enjoy! 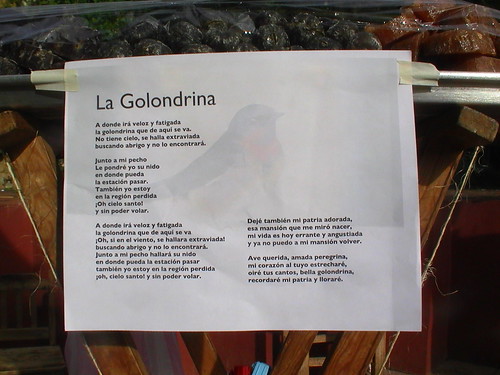