Links related to the Paiute:

Quotes
The Creator had put us on this land, land that you call Southern Nevada. He taught us to keep the land sacred and to keep it healthy. We were also taught the ways to heal ourselves and others. These teachings are what we practice today; it is our way of life. All lands are sensitive and sacred and should be treated with respect. Some parts of the land give us food while other places give us medicine. If these lands are destroyed or contaminated they will not provide for us the things that we need. Some health problems cannot be healed by your western medicine, yet this land provides us the medicine to heal those health problems. This land is sacred and also provides ways for us to travel in safety. I’ve seen instances where the land had provided my family with a safe journey. I have used medicine from this land and seen how much this medicine works. We are not the only creatures that this land provides for. The creatures that live in this area, not only on the ground but in the sky and in the water, the land provides for. The plants are also residents of this land. All of these things are alive also the land is alive and it breathes just the same as you and me. Without these creatures and the plants we would be without food, medicine, and shelter. We would not be provided with even the clothes that we had worn, in the past.
– Calvin Meyers, Moapa Southern Paiute , cited in Little Springs Lava Flow Ethnographic Investigation

Deeply grounded in their environment, the Northern Paiutes believe that power (pooha) resides in natural objects such as animals, plants and geographical features. This strong connection to the environment is evident in the names of different bands. For example, Pyramid Lake Paiutes are called Kuyuidokado (Cui-ui eaters), after the Cui-ui fish, found nowhere else in the world.

The Northern Paiute live in areas including Lovelock, McDermitt, Mason Valley, Smith Valley, Pyramid Lake, Reno-Sparks, Stillwater, Fallon, Summit Lake and Walker River. Unlike many Native Americans throughout the country, the Pyramid Lake Paiute and the Walker River Paiute never faced complete relocation. Their ancestors have lived there for millennia. The Pyramid Lake Indian Reservation is home to the only Scenic Byway in the country completely within a tribal reservation.
The Northern Paiute all share the desire to make the present and the future better than their challenging past while teaching younger generations appreciation of their cultural and linguistic heritage.

Every third weekend of September, several hundred American Indians and visitors gather at the Walker River Paiute Tribe reservation in Schurz to participate in a spiritual ceremony that celebrates life and the harvest. The festival’s many events include an Indian rodeo, powwow dance, stick games and pine nut dance. During the pine nut dance, dancers move on sacred ground in a circle around a staff with eagle feathers and tobacco offerings for what is called the pine nut blessing. The spiritual ceremony dates back more than one hundred years to a time when the pine nut was winter subsistence for Great Basin Indians. Today, the dance is a way to honor the tribe’s ancestors, preserve native traditions and revive spiritual practices.

The Southern Paiute:
Since at least 1100 A.D., the Southern Paiute lived in 15 bands across southeastern Nevada and neighboring states. To survive the desert environment, they drank from springs, hunted wild game and harvested plants.
Two groups of federally recognized Southern Paiute bands live in Nevada: The Moapa Band and The Las Vegas Paiute Band. The Pahrump Band of Paiute also lives in the area. The native languages of the Southern Paiutes and Northern Paiutes are different but related.
The Southern Paiutes operate the Las Vegas Paiute Golf Resort with three 18-hole courses—each rated 4 ½ stars by Golf Digest—and a restaurant with views of the Sheep Mountains. In addition, the Moapa Paiute Travel Plaza with its 2,500-square-foot casino and fireworks store greets visitors on their way to Valley of Fire State Park. The Moapa Paiutes also are developing the first large-scale solar project on tribal land, which will provide tribal revenue and jobs.

These hardy people survived thousands of years of harsh conditions in their native desert until the rapid acceleration of westward expansion, powered by the railroads, brought an end to their traditional lifestyles. In the 20th century, after years of federal back-and-forth policies toward Native Americans, the Paiutes eventually regained some of their traditional lands and a colony in the heart of downtown Las Vegas – hence, the name of this documentary, “A City Within a City: The History of the Las Vegas Paiutes.”

Director Stan Armstrong and Screenwriter Terrence Williams saw in this project an opportunity to connect not only with their own distant native ancestry, but with that of our entire nation — to understand our nation not as a collection of cultures arbitrarily separated by ethnicity, language or culture, but as one people, with many tribes, through the exploration of the beautiful, moving world of the Southern Nevada Paiutes and the Circle Dance which unites us all, they said.

As the documentary demonstrates, the Paiute people, their Ute cousins and all the other tribes throughout Nevada and across the nation, face severe, sometimes systemic social, economic and political problems that have been present since the first contact between Native Americans and European settlers.

“This19th-century holocaust against the indigenous peoples of America is a shameful stain, along with slavery, on our noble experiment in liberty,” Armstrong said. “It is only by confronting that history, by preserving these experiences, and now treasuring the contributions of living Native American culture that we can begin to ‘do right always,’ as our state’s Native Prophet once said.”

“All is not tragedy,” Armstrong said. “The Paiutes are not museum relics. They are a vibrant people with a proud history and a long-term, singular role in the development of Native American spirituality. The aim of ‘A City Within a City: The History of the Las Vegas Paiutes’ is to let them tell their story to all of the peoples of America, to carry the lessons from their culture and soul into the 21st century, when perhaps our nation tribe needs them most.” 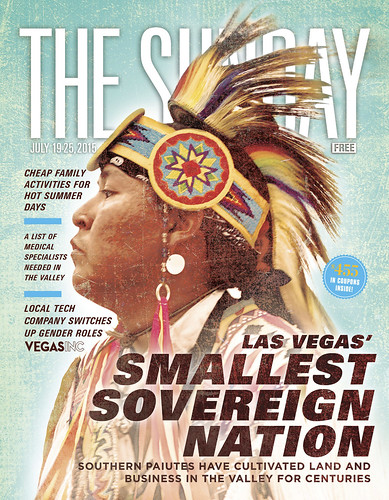