The northwest section of Chihuahua is home to many archaeological sites, the most famous of which is the Paquimé Archaeological Site, 7 kilometers (4.3 miles) south of Nuevo Casas Grandes. The site was declared a UNESCO World Heritage Site in 1998.

History
This conglomeration of adobe houses was home to the Paquimé civilization, which settled in northern Mexico between A.D. 900 and 1340. At the end of the 15th century it was destroyed by enemies and abandoned. Since then the roofs have collapsed, leaving only the walls, plastered in a brilliant white that contrasts strongly with the nearby vegetation.

Some of the buildings were once three stories tall, much like Chaco Canyon to the north in present-day New Mexico. The layout resembles a maze.

History
The Paquimé were farmers and traders. You’ll see the remains of the adobe hutches where they kept turkeys, a bird native to the Americas. Artifacts show that they exchanged goods with the Puebloan Peoples in the north and groups in Central Mexico.

The Mesoamerican influence is apparent in the ball court and the monuments to Quetzalcoatl. One of the successes of the civilization was its production of multicolored pots made without a potter’s wheel. You’ll see examples in the museum, and if the style appeals to you, local potters continue that tradition in nearby Juan Mata Ortiz.

Visit the Museum of Northern Mexico Cultures next to the archaeological site. The museum exhibits artifacts from the Paquimé culture as well as surrounding Indigenous groups — the Chichimeca, Mogollon, O’odham, and Puebloan Peoples. The museum has various fossils of mammals and a large collection of arrowheads from Clovis and Folsom. 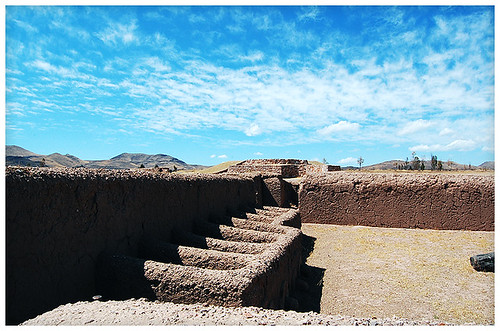