Wikipedia: The Rogue River in southwestern Oregon in the United States flows about 215 miles (346 km) in a generally westward direction from the Cascade Range to the Pacific Ocean. Known for its salmon runs, whitewater rafting, and rugged scenery, it was one of the original eight rivers named in the Wild and Scenic Rivers Act of 1968. Beginning near Crater Lake, which occupies the caldera left by the explosive volcanic eruption of Mount Mazama, the river flows through the geologically young High Cascades and the older Western Cascades, another volcanic province. Further west, the river passes through multiple exotic terranes of the more ancient Klamath Mountains. In the Kalmiopsis Wilderness section of the Rogue basin are some of the world’s best examples of rocks that form the Earth’s mantle. Near the mouth of the river, the only dinosaur fragments ever discovered in Oregon were found in the Otter Point Formation, along the coast of Curry County.

Fighting the weed invasion on the Rogue River

Elsewhere on the Web
https://www.oars.com/adventures/rogue-river-rafting/ 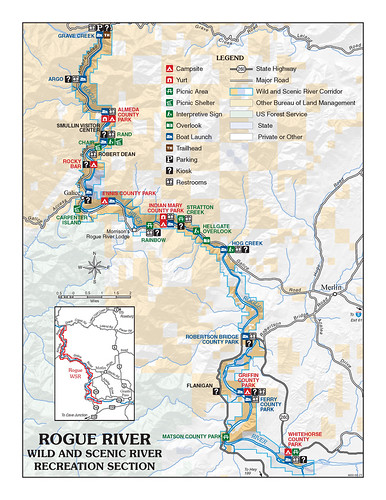