The town boasts a spectacular landscape. What cannot be easily seen is the enormous underground lake, which emerge as the springs in Tamazulapan.

Visitors admire the beauty of the setting long before arriving in the village. The ‘El Mirador’ lookout is perched on a 400-meter high plateau that offers a great view of the entire town. As you arrive, look for ancient terraces on nearby hillsides.

Mixtec World
Apoala is a Mixtec word meaning ‘where they share the water.’ Most of the trails and sites of interest are reached by following the Apoala River. According to the Mixtec creation story, two giant trees growing along the banks of this river fell in love and linked their roots and branches. From this union emerged the first Mixtec man and woman.

A must-see is town is the city library which has a copy of the Nuttall Codex that depicts the origin and history of the Mixtecs and of their towns.

Besides portraying the region and its haracteristics, the document narrates the heroic feats of a great ruler named Eight Deer Claw of Jaguar.

Natural World
Apoala has numerous trails to explore. A local guide is necessary to make any trek.

The Picturas Respuestas (Discovered Pictures) are glyphs that are at least 5,000 years old and the oldest Mixtec drawings in existence.

Near the campsite area is Cueva de la Culebra (Rattlesnake Cave) which has two chambers filled with stalactites and stalagmites. The first chamber has an underground lagoon. The second chamber has a stalagmite shaped like a tiara or miter, which the villagers call the Stone of the Archbishop.

Returning to the plain called Arriba del Agua, hike about two kilometers until reaching Morelos Canyon. Two enormous peaks approximately 400 meters high and 200 meters long are divided by a narrow passage of from ten to fifteen meters in width. This passage is called peña que se junta (the peak that joins), because when looking up you get the impression that the peaks come together.

A highlight of any visit is the hike to the waterfall Cola de Serpiente (Serpent’s Tail). The hike follows the Apoala River two kilometers downhill at which point the river becomes a 60-meter high waterfall.

Colonial World
The Santiago Apóstol Chuch was constructed in the sixteenth century.

Transportation can be complex. 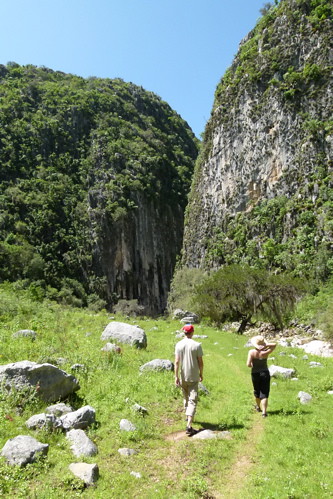