Soil = the upper layer of earth in which plants grow, a black or dark brown material typically consisting of a mixture of organic remains, clay, and rock particles

Recommended listening
Soils: the foundation of civilisation – A handful of soil contains about 10 billion organisms. Iain Young presents a range of mind-blowing statistics about the life that exists in soil

Soil fertility – Food production has to double – without using more water, more fertilisers and more land – by 2050, if there is to be enough to feed the world. The answer is improved soil fertility.

Enriching soil with biochar – Adding charcoal to soil regularly over a long period has been shown to radically improve soil and its ability to support crops. Organic carbon in soils is lost as forests are replaced by crops. Gradually over time, the soils decline. Adding biochar is a remedy. It’s a method that has been employed by some Aboriginal and South American cultures for centuries.

International farming delegates gather in Australia – Conservation farming is an approach to paddocks and crops that says we should disturb the soil as little as possible in order to conserve water and maintain soil biota.

What a waste – the garbage that improves the soil – All that waste tossed out from the kitchen usually ends up in landfill.Now a project called City to Soil is offering an alternative – the option of turning smelly scraps into compost that can boost the organic levels of soils on farms, local gardens and vegetable patches.

Soil carbon conundrum – There’s been a breakthrough with soil carbon trading that could get rural Australia sequestering carbon in the ground and earning credits for it. Soil carbon holds the remarkable promise of dealing with two national crises at the same time – climate change and our extensively degraded soils. But it’s deeply politicised, and the science is not clear. Di Martin reports

Creating an underground map of WA – Travellers in WA are being encouraged to stop and collect soil samples in a massive citizen science project. MicroBlitz is enticing farmers, families, school children, environmental groups and grey nomads to collect soil samples on their travels or properties which will allow University of Western Australia researchers to build a baseline map.

Arches: Are national park rules too strict? – Erin Alberty – Salt Lake Tribune – @erinalberty “I concocted an elaborate fantasy about how cryptobiotic soil is actually a large city of tiny fairy houses, and if she steps on it, she’ll kill the fairies. “I WANT TO KILL THE FAIRIES!” she howled.”

Quotes
The soil is the great connector of our lives, the source and destination of all.
– Wendell Berry

Think of your soil as your garden’s bank account. Whenever you plant something – a vegetable or flower – and harvest it, YOU TAKE SOMETHING OUT OF THE ACCOUNT. Just like money, you can’t do this for too long before your account runs dry – either of money or fertility.
– Harvest Blend Compost

We know more about the movement of celestial bodies than about the soil underfoot.
– Leonardo da Vinci

A single handful of soil contains in excess of 500 species of fungi and potentially more than 50km of fungal mycelium. There are 10,000 species and a staggering 100 billion individual specimens of bacteria. Tens of species of tiny plants collectively produce over 500m of often invisible root systems. – Farmers Weekly

A few interesting and important facts about soil: 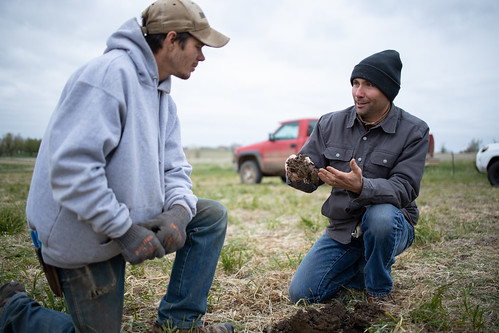