Skip to content
home Nature, Technology, Video When Mars Was Like Earth: Five Years of Exploration with the Curiosity Rover

Latest video from SVAstronomyLectures: When Mars Was Like Earth: Five Years of Exploration with the Curiosity Rover.

For five years, Curiosity has explored Gale Crater, one of the most intriguing locations on Mars. In this richly illustrated talk, the Project Scientist discussed what the rover is capable of and the many things it has discovered on the red planet.

Key Links
Founded in 1999, the Silicon Valley Astronomy Lectures are presented on selected Wednesday evenings during the school year at Foothill College, in the heart of California’s Silicon Valley. Speakers over the years have included a wide range of noted scientists, explaining astronomical developments in everyday language. A generous donation by one of our supporters is now enabling us to record the lectures and make them freely available to the public on the Web. The series is organized and moderated by Foothill’s astronomy instructor Andrew Fraknoi and jointly sponsored by the Foothill College Astronomy Department, NASA’s Ames Research Center, the SETI Institute, and the Astronomical Society of the Pacific.

With its rover named Curiosity, Mars Science Laboratory mission is part of NASA’s Mars Exploration Program, a long-term effort of robotic exploration of the red planet. Curiosity was designed to assess whether Mars ever had an environment able to support small life forms called microbes. In other words, its mission is to determine the planet’s “habitability.”

"Mars was once wet. Was it warm? Was it habitable? For how long?” were among the questions explored by Dr. Ashwin Vasavada, of the @NASA Jet Propulsion Lab, visited Smithwick Theater as part of the 18th Annual Silicon Valley Astronomy Lectures series. https://t.co/C6wioaQKEA

I’m looking back on 2,000 Martian days of exploration, and literally looking forward to climbing higher in those to come. The area ahead contains clays I’m eager to investigate: https://t.co/Uk8dCF0tYV pic.twitter.com/qiUxFsL43F 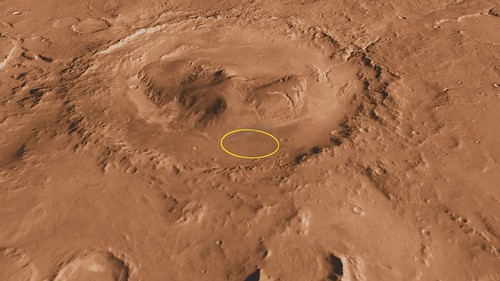