Toluca is the capital of Mexico State (Estado de México). At 2,663 meters (8,737 feet), Toluca is the country’s highest city and boasts a view of Nevado de Toluca Volcano.

Toluca is an industrial city with a number of local charms. Attractions include the cathedral, built at the end of the 19th century, the neoclassical Civic Plaza, and the indoor Cosmovitral-Jardin Botanico (Facebook), which boasts an impressive facade of more than 1,500 pieces of stained glass brought from Europe.

Crafts
The Casa de las Artesanias carries local handicrafts, including beautiful Temoaya carpets. Clay tree of life statues are available at the nearby town of Metepec, only 4 miles southeast of Toluca. Monday is Metepec’s market day.

Cuisine features pork sausages, some green with the meat ground with herbs.

Etymology
In the Náhuatl language of the Aztecs, the name Toluca is a variation of ‘Tollocan,’ which means ‘Place of the God Tollotl.’

Location
Toluca is located 40 miles west of Mexico City in the State of Mexico. 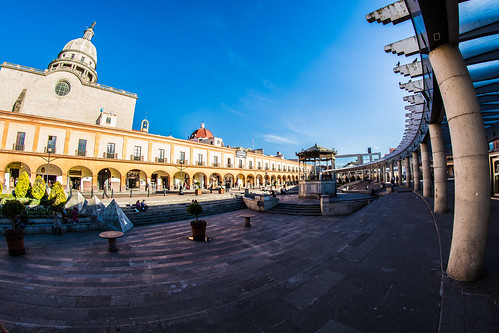 "Along the Colorado" marks one year since the river's first official shortage was declared. For the seven states along its course, this means new restrictions and a changed relationship to the river. See our new exhibit that explores our water crisis: https://bit.ly/3Q9NsDP