Natural World
The islands are distributed across the Strait from Australia’s Cape York to Papua New Guinea. The archipelago is approximately 150 kilometers at the narrowest point and extends some 200-300 kilometers from east to west.

The Torres Strait itself was formerly a land bridge which was most submerged about 12,000 years ago, forming the Strait which now connects the Arafura and Coral seas. Many of the western islands are the remaining peaks of this land bridge.

Indigenous People
Although a quirk of history threw these islands into Australian territory, the Indigenous Torres Strait Islanders are Melanesians, racially and culturally related to the peoples of Papua New Guinea. The blue, green and white Torres Strait Island flag features the dari, a feathered headdress that symbolises peace and unity. Gab Titui Cultural Centre takes visitors on a journey through time. Torres Strait Islander guides share their local knowledge through personal tours. The centre is located on Thursday Island at the corner of Victoria Parade and Blackall Street. 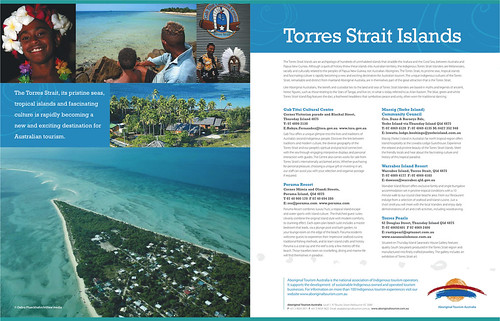