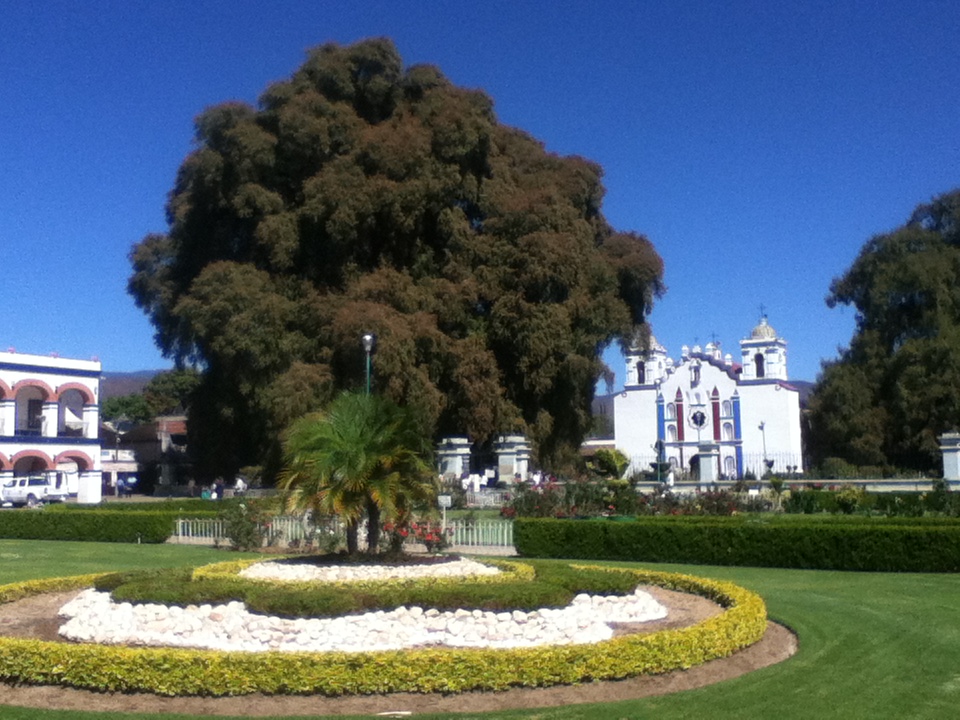 It’s best not to look at the tree as a single icon. Indeed there is a family of ancient trees. Rooted in the town of Santa María del Tule, the Tule Tree and its environs comprise a unique natural monument.

The town boasts several extremely large and ancient Montezuma Cypress trees. The largest – THE Tule Tree – dwarfs the town’s church and is more than 2,000 years old. This tree has a circumference of 54 meters (164 feet) — the largest girth of any tree on the planet. Imagine … this tree was a sapling at the time when the Zapotec civilization at Monte Albán was flourishing!

God’s Walking Stick
Local children point out unusual figures one can see in the tree. With pocket mirrors reflecting the sun, the guides will point out figures such as the squirrel’s tail and Carlos Salinas‘ ears.

A belief of the Ayöök (Mixe) is that the tree is the walking stick of one of their gods that took root and grew into the famous tree.

Natural World
The cypress (Taxodium mucronatum) known in Spanish as a sabino, in Náhuatl — the language of the Aztecs — ahuehuete and in Central Valley Zapotec Yagaguichiciña, is Mexico’s national tree. According to legend, Hernan Cortes cried beneath the boughs of a cypress after the Aztecs defeated the Spanish on La Noche Triste (The Sad Night)

The area surrounding the mammoth trees was formerly a marsh filled with cattails or bulrushes, known in Spanish as tules, which gives the town (and confusingly the tree) its name. Environmental degradation as well as increased urbanization and irrigated farming have diverted water from the aquifers. During the dry season, the water table decreases more than six meters (20 feet).

According to the local environmental group Mi Amigo el Arbol headed by environmentalist Jorge Velasco, if only two of the underground aquifers were restored, there would be sufficient recharge of groundwater supplies to ensure the survival of these trees.

“The most effective solution to ensure survival is to have enough water throughout the year as needed to replenish the aquifers and to be vigilant on water use so that it is appropriate for local needs and avoid wastefulness.”

This initiative bears watching to see if development runs the course of Joni Mitchell’s classic ‘Big Yellow Taxi‘ or charts a new direction by making the tree the centerpiece for bioregional planning.

Uprooted
In 2005 city authorities removed the youngest tree, one that had been planted by the King of Spain in the 1990s.

In Oaxaca’s new-found ‘tree consciousness’ some environmentalists were angered that the tree was uprooted, though others were pleased that the oldest trees would not have to compete with a young upstart for limited water resources.

Crafts
The plaza surrounding the tree boasts numerous stores. There is also a small craft market. Postcards are sold at several stores.

Transportation – From Oaxaca City, buses depart for El Tule every 10 minutes from the 2nd-class bus station. Taxis and buses can be hailed one block east of the baseball stadium on Niños Heroes. The tree can also be reached via a half hour bike ride, though there is considerable traffic and the roads don’t have much in the way of a shoulder.

Access – There is a small fee to enter the church courtyard.

Near the tree are plenty of restaurants and comedores. A clean and reliable choice is the spotless El Milenario, at Guerrero #4-A.

One kilometer west of town (on the north side of the highway to Oaxaca City) is a palapa-style restaurant serving Caldo de Piedra, literally ‘stone soup’ from the Chinanteco town of San Felipe Usila. It’s a bit rustic and it has limited menu, but it’s our choice for the best food experience in Mexico. (Photos) (Video)

Banking — There is an ATM machine near the children’s playground on the main plaza. For travelers in need of cash and visiting Teotitlán del Valle and Santa Ana del Valle to the east, stop here first!

Festivities — Residents celebrate the famous Tule Tree the second Monday of October. It’s a big party fit for a big tree! Look for garlands decorated with hanging bottles of refrescos, cervezas as well as grapefruit and empanadas. There is also a church festival on August 15th.

Take a look — From the bandstand (kiosko) how many cypress trees can you spot?