Background
The Usumacinta River is the largest river in Mesoamerica (seventh-largest in the world) and is shared by Mexico and Guatemala. It has a basin of 106,000 square kilometers (65,720 square miles) and every year it empties 59 billion cubic meters of water into the Gulf of Mexico. The river drains one of the largest areas of contiguous tropical forest in the region, the Selva Maya, part of the Mundo Maya. The river also flows through economically and politically marginalized regions.

The ecological and hydrological integrity of the Usumacinta watershed faces numerous threats from deforestation, hydroelectric development, and mineral exploitation on both sides of the border.

The river rises in the Peten of Guatemala and flows along its common border with the Mexican state of Chiapas before entering Mexico and flowing eastward to the sea through Chiapas, Campeche, and Tabasco. Almost half (42 percent) of Guatemala is drained by the Usumacinta. Two internationally recognized RAMSAR wetlands lie within the Usumacinta watershed, Guatemala’s Laguna del Tigre National Park and Tabasco’s Pantanos de Centla Reserve.

In 1996, the Gainesville, Florida-based Mesoamerican Environmental Law Project convened a roundtable discussion on cross-border environmental issues. The issue of damming the river has resurfaced — so to speak — in 2001 and 2002 via the development of the Plan Puebla Panama.

In a 2002 letter to President Fox, Mexican environmentalist Homero Aridjis decried plans to dam the river:

The Usumacinta’s natural, cultural, and archaeological importance make it unique in the world. We believe this is not the time to rely on old-model development schemes, but to seek solutions offered by new economic and technological models. The Usumacinta is more than just the water in its channel. It is the lifeblood of Mesoamerica, and one of the birthplaces of culture and meaning in the western hemisphere.

It is also a resource that any tourist board in the U.S. or Canada would envy. At our current level of knowledge a dam could unwittingly drown the equivalent of Pacal’s Tomb at Palenque, or Tutuankhamen’s tomb, forever. Neither nation’s patrimonial heritage is so intact or complete as to allow for such a loss. 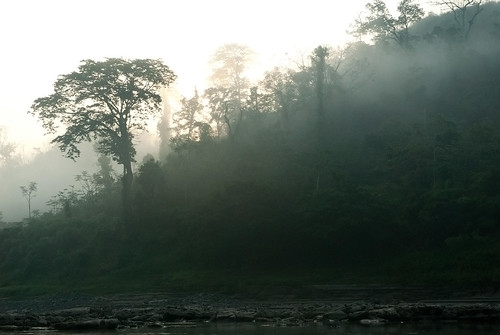