Las Vegas – October 1, 2017 marked the deadliest mass shooting in modern US history. Other outlets have more details of the attack, and we are keeping an eye on developments and the responses to this tragedy. The toll from the attack: 58 people killed, 527 people injured.

Las Vegas is a city built on hospitality and its reputation for being a place safe to visit has been sorely tested.

For locals and visitors, October 1 has been the catalyst for a new sense of solidarity, in good times and bad.

The shootings took place during the Route 91 Harvest Music Festival. The shooter was in a room at the Mandalay Bay Resort and Casino on the 32nd floor which overlooked the outdoor area. The suspect killed himself after authorities attempted to enter the room.

A portion of South Las Vegas Boulevard and nearby Tropicana and Russel Roads are or were closed for a time.

Landmarks around the world going dark or adopting special colors in wake of the shooting.

Reflections
We are part of a local, national and global conversation with the rest of the world asking whether it’s safe and sound to visit. I think it is but we need to show it. Not just with increased bollards and security personnel, but with the respect we show one another in this community. Talking is fine but now we have to act.

State of Nevada
How do we talk about it?
Las Vegas Reacts To Horrific Mass Shooting


The Nevada Independent – The moment Las Vegas long prepared for but hoped would never come to pass happened Sunday night.

Muted and sad AM talk radio

We are just learning the names of the victims

So many people want to donate blood appointments are being taken for Thursday. Generosity of visitors and locals

The community has rallied 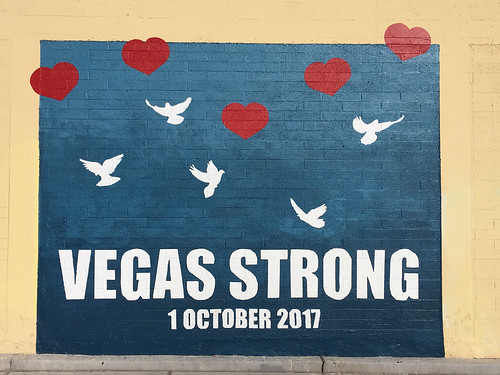