Visitor = a person visiting a person or place

Years ago (2005ish) Oaxaca’s Hugo Antonio Santiago suggested that instead of using the word ‘tourist’ or ‘traveler’ we use the word ‘visitor.’

A more inclusive approach to language is a better way to interact with one another.

Quotes
While Australians love a rant as much as the next ticked-off customer, they are more likely to see the funny side of a bad situation than British tourists, Flight Centre spokesman Haydn Long said. “Australians tend to be a little bit more adventurous and when you take the more adventurous option, you tend to be more tolerant of things not always being perfect.” Peter Hook, spokesman for the country’s largest hotel group, Accor Asia Pacific, said Australians have a more laid-back attitude to travel because we’ve had to “overcome the tyranny of distance. When you fly 24 hours to the UK, a park bench looks attractive compared to an economy airline seat.”
– Mark Russell, Beaches too sandy, fish scare the kids: it’s a Fawlty Towers world for some tourists

Why is it called tourist season if we can’t shoot them?
– Popular saying, Canada 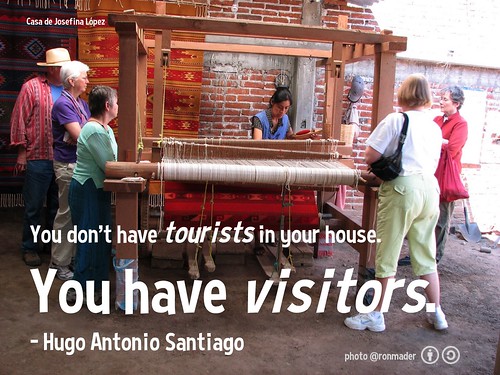