Chiapas, Mexico – The Biosphere Reserve El Triunfo protects the central portion of the Sierra Madre Mountains. With an area of 119,177 hectares, El Triunfo protects two of the most threatened ecosystems of Mexico: The Mountain Mesofile Forest (Cloud Forest) and the Tropical Humid Rainforest of Soconusco. In its totality, it has ten vegetation types and subtypes.

UNESCO
MAB: El Triunfo is located in the mountains of Sierra Madre de Chiapas in the southern part of the state. The terrain is generally steep and mountainous. The reserve is constituted as the limit between two of the largest hydrological regions of the state; the Pacific coast and the Grijalva-Usumacinta River. As a primary Pleistocene refuge, its location in the mountains of the Sierra Madre de Chiapas, it is considered an endemic area for different groups of plants and animals. El Triunfo is the most diverse evergreen cloud forest in Mexico, and one of the most important sites for bird migration. It is covered with evergreen seasonal forest, montane rainforest and lower montane rainforest that contain a higher proportion of endemic plants. A number of threatened mammalian species can be found in the reserve, namely Geoffroy’s spider monkey, margay, jaguar and puma. Avifauna includes horned guan, resplendent quetzal, azure-ramped tanager and great curassau. The population is estimated to 229,280 (1999) living in the buffer and transition area, and a floating population that migrates from Guatemala to work on the coffee plantations. The main activities are agriculture, primarily based on coffee cultivation, maize, ‘camedora’ palm collection, trade, construction and cattle rising. Coffee plantations have become an important issue, influencing greatly the economical, social and political lives of local peoples. However, poverty and marginalization along with illicit activities such as hunting of threatened species and collection of non-timber forest species, worsen the socio-political conditions. The principal goal of the biosphere reserve is to go further than classic local consultation in scientific and technical propositions. To attain effective sustainable development, local communities search to be involved in the biosphere reserve’s territorial management and implementation. 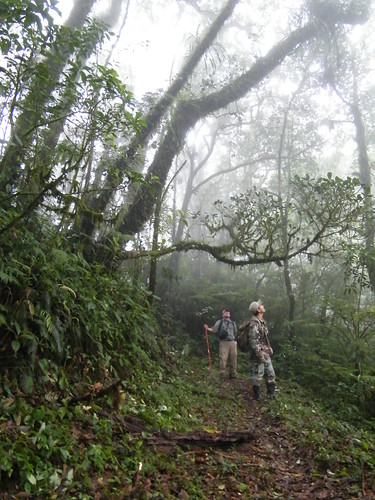