NAIDOC Week celebrations are held across Australia each July to celebrate the history, culture and achievements of Aboriginal and Torres Strait Islander peoples.

Wiradjuri woman Joanne Cassady, is the winning artist of this year’s poster competition. Get your free copy of the poster with Joanne’s artwork

The 2017 theme celebrates the essential role Indigenous languages play in both cultural identity, linking people to their land and water, and in the transmission of Aboriginal and Torres Strait Islander history, spirituality and rites, through story and song.

What impresses us from afar is the breadth and depth of celebrations.

NAIDOC originally was an acronym for the National Aborigines and Islanders Day Observance Committee. The (as yet unnamed) committee was first officially formed on Australia Day 1938 in Sydney by a group of around 100 Aboriginal people who gathered for the first Day of Mourning, to protest against the treatment of Aboriginal people around Australia.

In 1957 the National Aborigines Day Observance Committee (NADOC) formed and the second Sunday in July became a day of remembrance and celebration for Aboriginal people and heritage. In 1991 NADOC became NAIDOC (National Aborigines and Islanders Day Observance Committee), to recognize Torres Strait Islanders and to describe a whole week of recognition, rather than one day. The committee’s acronym has become the name of the week itself. 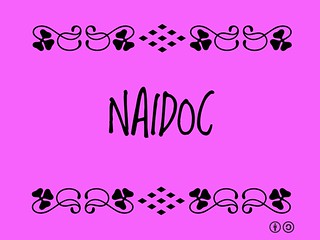