Members of the genus dominate the tree flora of Australia, and include Eucalyptus regnans, the tallest known flowering plant on Earth. Australia is covered by 92,000,000 hectares (227,336,951 acres) of eucalypt forest, comprising three quarters of the area covered by native forest.

Elsewhere on the Web
Eucalypt Australia – Facebook – @EucalyptAus
Five things you might not know about these flowering giant – CSIRO
The Tingle Forest (Australia) (PDF)
The rise and fall of the gum tree
https://www.rememberthewild.org.au/eucalypt/

Recommended Listening
Eucalypts in a time of climate change – Increasingly, we’re seeing Eucalypts in a state of transition, with the impacts of climate change forcing the species to adapt again. Guest: Greg Moore, an arboriculturist at the University of Melbourne and committee chair of the National Trust of Victoria’s Register of Significant Trees.

Lost and Found — River Red Gum – From a furniture maker’s workshop to the Barmah National Park, we take a tour of these ancient wonders. 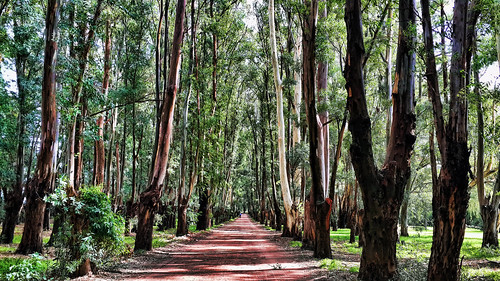 Wikipedia
Eucalyptus is a genus of nearly nine hundred species of flowering trees, shrubs or mallees in the myrtle family, Myrtaceae commonly known as eucalypts. Plants in the genus Eucalyptus have bark that is smooth, fibrous or stringy, leaves with oil glands, and sepals and petals that are fused to form a “cap” or operculum over the stamens. The fruit is a woody capsule commonly referred to as a “gumnut.” They are commonly known as eucalypts.