About the program: Affectionately known as ‘the little wireless program’, Late Night Live has been presented by Phillip Adams for a record breaking 25 years. He says, and many an envious broadcaster and journalist agrees, ‘I’ve got the best job in Australian media.’ That’s because the little program isn’t so little, casting the widest net in wireless, gathering its guests and topics from around the planet—the best and the brightest discussing history, current affairs and the world’s most challenging ideas. Adding even more interest, the program’s style is famously friendly, good humoured and irreverent. Listen and you’ll learn why Phillip calls his listeners ‘gladdies’ and ‘poddies.’

Fire legacies – It’s widely accepted, including by two inquiries, that climate change was a significant factor in the Black Summer fires of 2019/20. But in the response to the fires, and in the opportunities for preparation in the years before, many human, political and systemic errors were made.  Journalist Bronwyn Adcock (@bronwyn_adcock) lived through the huge Currowan fire on the NSW South Coast, and in a new book has dissected it from every angle, including policy and politics.

Wayne Quilliam; Culture is Life – Adjunct Professor Wayne Quilliam’s camera has been his ticket around the world. From picking up his first camera whilst serving in the navy, to now having held over 300 exhibitions across the globe and being published in over 1000 publications, he is one of Australia’s pre-eminent Indigenous photographic artists, curators and cultural advisers.

The frontline of koala conservation – The koala is listed as one step below endangered so why aren’t we saving them? The Australian Koala Foundation’s Deborah Tabart and specialist koala ecologist Dr Steve Phillips discuss all things koala: their personalities, their history and how a broken political system is pushing them to extinction.

What’s Modern Monetary Theory? – As the rate of global debt continue to rise at unprecedented levels, some economists argue that there’s no limit now to how much you can borrow. Printing money endlessly appears to be part of President Biden’s recovery plan, and is part of the theory known as MMT, or Modern Monetary Theory. Guest: Satyajit Das, author of A Banquet of Consequences: Reloaded.

The clans, clicks and culture of sperm whales – New research indicates that sperm whales were able to communicate to each other in order to avoid the whalers of the 19th century. Our guest is Hal Whitehead, professor and marine biologist at Dalhousie University in Canada.

Growing popularity of ‘Doughnut’ economics – Late Night Live – British Economist Kate Raworth’s ‘Doughnut’ Economics aims to ensure that no one falls short on the essentials of life, while ensuring that collectively we do not overshoot our pressure on Earth’s life-supporting system. Her theory is being attempted by cities across the world.

The new era: Space 2.0 – With the US, China and Russia increasingly flexing their space muscles, and more companies heading to the moon and beyond, a panel of experts discuss the current state of astro politics, business and culture. Guests: Steven Freeland, Alice Gorman, Donna Lawler

America’s waning war on drugs – Gonzo journalist Michelle Lhooq discusses the legalisation of drugs like marijuana and psychedelics in parts of the US and the impact on counterculture.

Tim Flannery on solving the climate emergency – The latest State of the Climate Report has confirmed our worst fears: the climate crisis has arrived here in Australia, and we’re running out of time to act. Does Australia’s response to the COVID-19 pandemic hold important lessons for dealing with this existential threat?

Songlines: the power and the promise – Margo Neale and Lynne Kelly offer an Indigenous and Non-Indigenous perspective on the meaning and significance of Songlines, why they have been so successful in keeping Indigenous knowledge intact for tens of thousands of years and how they work as an effective memory technique and tool.

Why Scientific American endorses Joe Biden – For the first time in Scientific American’s 175 year history the popular magazine has decided to endorse a candidate in the US Presidential election. Editor in Chief Laura Helmuth explains why it’s not Donald Trump.

Is Donald Trump a fascist? – Conversation with Sarah Churchwell @sarahchurchwell
Mentioned: American Fascism: It Has Happened Here
16:00 We could get ourselves in a lot of trouble trying to figure out what Trump is aware of at the moment. Whatever he was was once aware of, he is clearly less aware of on a daily basis.

Funding species survival – With over 1 billion animals dead and species extinction already an issue before the wildfires, how adequate is funding for the survival of threatened species in Australia?

Can Indigenous thinking save the world? – As the world faces unprecedented environmental and societal problems, is it time to review the ancient wisdom of our Indigenous Australians? What were the systems which they observed, that we do not, and is it too late to have an about-turn and reshape our future as a more viable and sustainable system?

Geoffrey Blainey: Before I forget – Geoffrey Blainey has written 40 or more history books, The Peaks of Lyell, The Rush that never ended and of course the classic, Tyranny of Distance. Before I Forget is an early memoir covering his childhood ,his school and university days and his first years as a professional historian.
mp3
44:00 Not only what you see with the eye but what you hear with the ear
46:00 Continental drift
46:30 How do you organize?
47:00 History of the world
47:50 Manila folders
48:50 You learn more than the readers
49:00 There is a great pleasure in learning yourself
49:50 So lucky you didn’t go to university
50:00 I believe in self-help
50:50 First time without a book underway
51:45 Reproachments

What do fossils, babies and Einstein tell us about the way our brains have evolved? – Renowned paleo-anthropologist Dean Falk on how the evolution of our brains led to the emergence of language, music, analytical thinking, and warfare in humans.

What Katy did: a 19th century documenter of Indigenous language and stories – When Katherine ‘Katy’ Langloh Parker moved to the remote north west of New South Wales in the 1880s, she became one of the first people to notate an Indigenous language.

Eva Cox is still trying to change the world
mp3
44:00 Relearn society, community
46:30 Pale male stale version
47:00 The feminized has to be about picking up the feminized side of things and see that they are as important … Value the soft skills the relationships, the societies, the arts not because they have financial value but because they make us feel good …
48:00 We can start valuing what a society looks like, not an economy

The genius of Indigenous languages – @RachNordlinger

Features
Phillip Adams on life at 80, broadcasting, and hoping to die at the mic 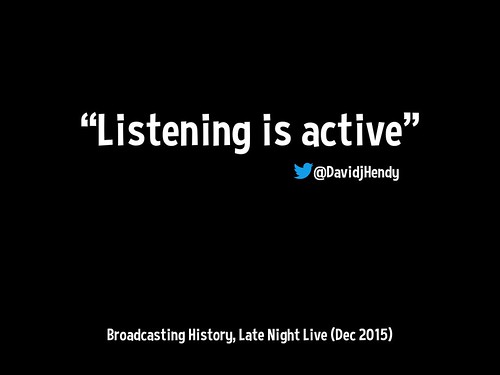 misc
Gladys
I don’t mean to interrupt
I’m sorry to interrupt you
Many, many years ago …
Tweethearts
heavens above
gracious
remind the listener
You’re too young to remember
Would you explain to an aged broadcaster …
Always amused me
Be upstanding